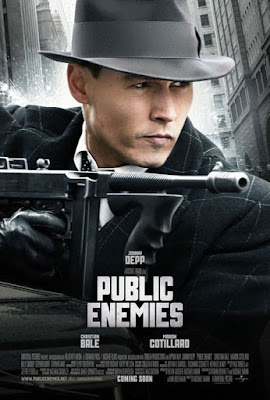 The Thirties gangster movie is another film genre for which I’m a sucker. Give me a movie about guys in fedoras and trenchcoats who use tommy guns to rob banks and speed around in roadsters, and I’m a happy viewer. It’s even better when there are other guys with fedoras and trenchcoats and tommy guns (the FBI, in other words) trying to catch them. So you know I had to watch Michael Mann’s PUBLIC ENEMIES.

The center of this film is John Dillinger, played by Johnny Depp, but almost of equal importance is FBI agent Melvin Purvis (Christian Bale). The cat-and-mouse game they play as Purvis tries to capture Dillinger and Dillinger continues robbing banks and eluding arrest (for the most part) is very suspenseful. I don’t know how historically accurate all the details are (I have the Bryan Burrough non-fiction book on which the film is based but haven’t read it yet), but I do know enough about Dillinger so that I was aware all through the film of how it had to end. I don’t think that knowledge took away anything from my enjoyment of the movie, though, and I enjoyed it a lot.

PUBLIC ENEMIES got mixed reviews when it was released, but I thought it was excellent. It’s a determinedly old-fashioned movie and looks great, despite the fact that it was shot on high-definition video rather than film, or maybe because of that. A cinematographer I ain’t. All I know is that I really enjoyed the look and style of the film. Depp, as usual, disappears into his role and is really believable as Dillinger (except for one moment when he’s running through the woods and flapping his hands like Captain Jack Sparrow), and Bale is pretty good as Melvin Purvis. Character actor Stephen Lang turns in a fine performance as a grizzled special agent. There’s a lot of action, mostly gun battles, and for the most part they’re well-staged and easy to follow. The period detail looked good. I kept hoping Dillinger would walk past a newsstand full of pulps, but if he did, I missed it. The only magazines I spotted were copies of LIBERTY, LADIES HOME JOURNAL, and (appropriately enough) TRUE DETECTIVE. Even the music is good, with a recurring bluegrass theme during the bank robberies and chases reminiscent of the music from BONNIE AND CLYDE. Maybe a little too reminiscent, but I won’t quibble.

I won’t guarantee that you’ll like this film, but if you’re a fan of gangster movies and haven’t seen it, you really ought to give it a try. I thought it was one of the best films I’ve seen recently, and it’s one of the rare movies I wouldn’t even mind watching again. Highly recommended.

(One last note: in watching the scenes at the Biograph Theater, I realized that I’ve never seen the Clark Gable/William Powell movie that was playing there on that fateful night, MANHATTAN MELODRAMA. It’s now on my Netflix list.)
Posted by James Reasoner at 11:01 AM

I watched the film last week and thought it was tops as well. I'm also a sucker for Mann films. THIEF, THE LAST OF THE MOHICANS, HEAT etc. Hell of a director.

This movie looked good on the big screen.

I also thought this movie was great. Mann got slammed by some for taking the digital film approach, but I thought it worked out very well.

Read the book-excellent. I liked the movie but wish they had not played loose with the facts. The deaths of Pretty Boy Floyd and Baby Face Nelson are not accurate. Nelson outlived Dillinger and Floyd was not killed by Purvis.

I enjoyed the movie, too, but was dating a girl at the time who did not like the violence but was too timid to tell me that she wanted to leave. I told her later leaving would have been okay with me. We are now no longer seeing each other so I can watch all the violent movies I want. Woo hoo!

The only thing that ruined the movie for me was the ending of Max Allan Collins's "Dillinger" tale, "True Crime", and his alternative suggestion of what REALLY happened at the Biograph, maybe because I like the idea that Dillinger lived on to taunt Hoover for the remainder of his days. But alas, Mann stuck with the official story, and, as usual, got the gun details as close to right on as possible, which are always ignored in movies in general and gangster shows in particular.

I saw this when it was in the theaters and had mixed feelings about it. I thought the production of the movie was very good - Mann is very stylistic, and the story carried me away. But like other commentors have said, they played a little with the facts and also cleaned up Dillinger and his cronies so that they look like movie stars - ahem.

I watched this last week in HD at home and was underwhelmed. The camera seemed like it never settled and the history was shoddy. Depp is an amazing actor.

I wanted to see this but wasn't sure how good it would be. I'll give it a try now.

i watch public enemies from pzack.com and that was a good movie.