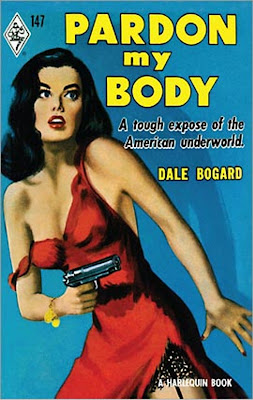 Here's an interesting article about the half-dozen crime novels from Harlequin's early days as a publisher that have been reprinted recently to help celebrate the company's sixtieth anniversary. I plan to buy these but haven't gotten around to it yet. Now, if it had been me, I would have picked a Western and an adventure novel (probably something by H. Bedford-Jones) to be reprinted, too. I don't know how well these books are selling, but it would be nice if Harlequin would reprint more from the days when they published other genres besides romance. (Thanks to Frank Loose for the link.)
Posted by James Reasoner at 1:19 PM

Harlequin's doing some vintage romance covers, too, I think. Maybe they'll get around to the other genres.

I've googled around for a list of their early titles but came up empty. Anyone seen one?

I bought the six reprints and have read KISS YOUR ELBOW, which I liked a lot.

I kind of balk at their attempt to clean things up a bit to suit modern sensibilities. That sort of thing really bugs me.

Yeah, that is pretty bothersome. I'd prefer they just leave the books alone and let them be true to their era.

It's not complete by any means, but there are some cover scans of other early Harlequins here:

I've read the Dale Bogard and both the James Hadley Chase books and am very disappointed. Not very good books. If these are the best they can come up with I'll stick to Hardcase and Stark House for vintage crime reprints.

Pity, Steve...I picked up one of the Chases, just to see what I made of it, but haven't read it yet...B&Ns have dump-in bins for them, and wall racks for the romance reissues (the other notable fact about them is that the cover stock is so slick that they are nearly frictionless, and make for slightly more difficult stacking than most books do, while carrying them about in the store with a handful of others).

Steve O I pciked up the same three and could not agree more. Totally dissapointing. I knew I should have used that gift card for something else.

The British hardboiled hacks weren't usually very good, I'm sorry to say. If I were an editor at Harlequin, I'd go for American authors, like M. Scott Michel on whose Wood Jason PI books Julian Symons commented on very negatively, but makes them sound interesting at the same time.

I wrote about some of the books already back in August:

Sorry, Wood Jaxon. I'll do a write-up in Pulpetti one of these days - but I haven't read any of Michel's books, admittedly.

This collection of reprints is fascinating. I wonder if the two rejected stories would have been better than some of the six they went with. The editting for content seems unfortunate. They picked their stories for their sleazy covers after all. They may as well go all sleazy. But when you're a respectable compan and want to stay that way I guess some things can't be allowed.

I've read Kiss Your Elbow, a charming, leisurely story of actors in New York. Pardon My Body is enjoyable in a Dan Turner short of way but the story reads like it was reading overnight with a six pack of beer on hand. And I started reading No Nice Girl which doesn't have any dead bodies as far as I can tell. It's a straight woman's horror novel in which a succubi tries to steal her man away.
If forced to me read other stuff, involving a mystery novel by Harlequin escape Merline Lovelace, about a woman USAF Lt. who finds a dead body while testing an ectoskeleton robot. Sharp writing, fast paced, good action scenes, great restraint on the romance.

Merline Lovelace is an excellent author. I've read quite a few of her books and have more around here to read.