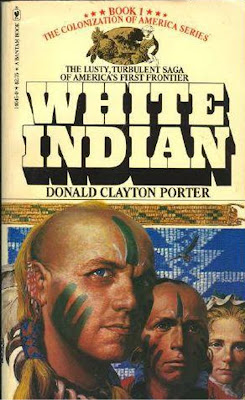 Since yesterday was Thanksgiving, I thought it would be appropriate to take a look at a novel that has a connection to the Pilgrims, although it’s set somewhat later. WHITE INDIAN is the first book in what started out as the Colonization of America series. It opens in 1685, several generations after the founding of the first English colony in North America. Settlers from the Massachusetts Bay Colony have established an outpost known as Fort Springfield in the valley of the Connecticut River, but they have to worry constantly about Indian attacks, and with good reason. During one such raid by Seneca warriors, a young couple named Jed and Minnie Harper are killed, and their infant son is carried off by the Seneca chief Ghonka, who adopts the boy, names him Renno, and raises him to be a great warrior.

That’s just the beginning of this novel, which follows Renno to manhood. Like Tarzan, he comes to realize that he’s different from those who have raised him. Also like Tarzan, he’s the biggest, fastest, strongest bad-ass in the jungle – I mean forest – and eventually allies himself with the English while still maintaining his ties to the Seneca. He fights on the side of the English during clashes with the French, who are also trying to establish colonies in North America, and starts a long-running feud with a Frenchman who’s so evil he practically twirls his mustache. Like most of the historical fiction produced by the book packaging company Book Creations Inc., WHITE INDIAN and its sequels contain a heaping helping of soap opera to go along with plenty of colorful and sweeping action. Sometimes the historical accuracy was less than rigorous, but the editorial policy at BCI was “Never let history get in the way of a good story.” And BCI was definitely in the business of turning out good stories.

Now here’s the background of this series, for those of you who are interested. “Donald Clayton Porter”, the author of this book, was actually Noel Gerson, who was also the original “Dana Fuller Ross”. Gerson wrote a number of historical novels over the years, under his own names and those two house-names, as well as the pseudonym Bruce Lancaster and possibly others. His style is pretty unmistakable, no matter what name is on the book. His prose is a little clunky in places and sometimes he skimped on the action scenes, but he possessed the true storyteller’s knack of getting the reader to keep turning the pages. There’s also a mild edge of sexual kinkiness in many of his books, and it shows up in the White Indian novels as well. Renno has a habit of deflowering most of the beautiful English virgins he meets, and then his sidekicks among the colonists marry them and everybody is happy.

When the series began in 1979, following on the success of John Jakes’ Kent Family Chronicles and Gerson’s Wagons West novels as Dana Fuller Ross (both BCI series), it was known as the Colonization of America series, as noted above. But within three or four books, it became the White Indian series, and subsequent reprints of the early books carried that name instead. I suspect this was because someone at BCI or the publisher, Bantam, realized that readers were asking for more of those White Indian books, rather than using the more cumbersome original title. The series ran for 28 books, most of them featuring descendants of the original Renno (the longest-lasting hero in the series was also named Renno), and the books continued to appear until the mid-Nineties. Gerson wrote the first twelve, Hugh Zachary wrote #13 through #26, and BCI editor Paul Block authored the final two books in the series, which are collectible now because the series had pretty low print runs by that time. Zachary took over at least two other BCI series in mid-stream, THE AUSTRALIANS under the name William Stuart Long (originated by Vivian Long) and CHILDREN OF THE LION, published under the house-name Peter Danielson (originally George Warren). The Donald Clayton Porter name was also used on the stand-alone novel PONY EXPRESS, which I believe was by Gerson, and the short-lived Winning the West series, written probably by Gene Shelton, although Zachary may have contributed to it, as well.

As for my own connection with all this, I worked for BCI, too, and while I wrote six books as Dana Fuller Ross (the Wagons West prequels known as The Frontier Trilogy and The Empire Trilogy), I was never Donald Clayton Porter. I did one book as Peter Danielson, the final book in the Children of the Lion series. At its high point, BCI was a great place to work, with excellent editors, and the company turned out a tremendous amount of top-notch historical and Western yarns during the Seventies, Eighties, and early Nineties. If you’ve never sampled any of their series, WHITE INDIAN would be a fine place to start.
Posted by James Reasoner at 12:18 AM

I used to pick up the higher numbers in the series (from around 24 onward) to sell on eBay. They always brought good prices.

I enjoy your insights into the writers behind the stories.

Wow! Thanks for the history lesson on the series writers. Almost a saga in its own right.

Thanks for the information! I picked up nine of the Gerson White Indian books, and a number of other BCI series books, for free, last Monday, at the conclusion of a library book sale. I'm glad to learn more about them. I've read a number of Gerson's books, and always enjoyed them, but I did not know he was also Bruce Lancaster.

Great post James, and one that makes be want to read some of these books (I have the first 11 and a few latter numbers).

One of those I have, Fallen Timbers, is called a Special Edition - and I believe there's another (Hawk's Journey) - any idea why they are called Special Editions, as they they look like the other books and carry a series number?

Didn't Big Jim Bowie make a guest appearance in a couple of these books?

I really enjoy the back story behind series books, especially familiar titles that were around me growing up.

Very interesting! Now I'll have to go look for these books!

I'm sure I have some of these and I'll have to dig one out and read it Real Soon Now. Will also pick them up when I see them at what few used book stores we have left.

I don't know why some of the books were designated as Special Editions, unless it was just a gimmick to try to boost sales.

I haven't read the whole series, but I wouldn't be surprised if Jim Bowie showed up in some of them. BCI liked to have historical characters appear in their series.

Excellent post, but just to clear up a point you made---Bruce Lancaster was a real person, and the author of some of the best historical fiction of the 30s-60s. Gerson had many pseudonyms including Carter A. Vaughan, Samuel Edwards, and Paul Lewis, to name a few.

You're absolutely right. It was Carter A. Vaughan I was thinking of as a Gerson pseudonym. I think Lancaster wrote some books for Lyle Kenyon Engel during the Fifties, which added to my confusion.

Thanks for this information. After all these years, I finally get to know something about this author.

I am Norwegian, and this series of books was also printed in Norwegian. I have book 1 to 20. I dont know if the rest was released here.
I read them all first time in the 90's, and have just started again know with the first book "White Indian" ("Hvit Kriger" in Norwegian)
I thought they were excellent. The most entertaining books I ever read I think. It was like I could never stop reading.

The series was called "Den Nye Verden" - ("The New world") in Norwegian.

I was wondering if the character "Renno" was inspired by the real Seneca chief Cornplanter? Since he also was white (or half white) after what I read somewhere.

I have read each of these books listed and wanting to follow them in order I read book one then two and so on. The only White Indian books I have not read are 27 and 28. After reading book 26 I discovered that the books were not written by Porter. To tell the truth I was a little let down and have not tried to find or read 27 and 28. I also had previously read all the books by John Jakes, again in the order they were written. Now I find out that he also was someone else. I dont know what to think since I loved both series. Now if I find out that Louis LaMour books were not written by him I will just sell all of my 3000 paperback western books.

Well based on this 7 year old post I decided what the hell and bought the whole series, even the expensive later ones. What I'm impressed by are some of the detailed cover artwork which I haven't really seen with a lot of mass market paperbacks.