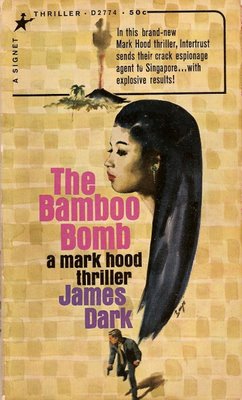 Like a lot of people who have a lot of old paperbacks, I sometimes have trouble remembering which books I own and which I don't. So when I come across something interesting in a used bookstore, I occasionally have to ask myself, do I already have this one or not? And if I can't remember, I err on the side of caution and buy it anyway, because -- in the words of a very wise man -- you never regret the books you buy, only the ones you didn't buy.

Anyway, I was discussing this with Livia the other day, which led me to remark in passing, "That's why I have five or six copies of THE BAMBOO BOMB by James Dark."

She just looked at me and asked, "Have you ever actually read it?"

Mark Hood is your typical Sixties secret agent: rich American playboy, Rhodes scholar at Oxford, internationally renowned cricket player, race car driver, karate master, etc. Just the sort of guy who spent the Sixties fighting the bad guys and keeping the world safe. He works for Intertrust, a top-secret international spy organization. In this book he's sent to Singapore to pull the old "American down on his luck" bit so he can infiltrate a group of villains who are out to destabilize the Far Eastern political arena . . . I think. I'll admit I had a little trouble following the plot because I know almost nothing about politics in the Far East during the Sixties. But that's okay, because Hood fights a bunch of bad guys, romances a couple of beautiful girls, and blows a bunch of stuff up real good.

One of the best things about this book is its length -- 127 pages. And there's more plot in that 127 pages than in a lot of 500 - 600 page thrillers that I've read. True, there's not much characterization or back-story, but sometimes I don't care. You pays your money and you takes your choice. More than anything else it reminded me of the Sam Durell books by Edward S. Aarons, with its hardboiled hero and exotic locations and convoluted plot. "James Dark" didn't write as well as Aarons, but then, few people ever did when it comes to this particular sort of book.

"James Dark" was really J.E. MacDonnell. I know nothing about him other than the fact that he wrote a lot of war and espionage novels in various series under various names. The Mark Hood books were originally published by Horwitz in Australia during the mid-Sixties, and at the same time about half of the books were reprinted in the U.S. by Signet, cashing in on the secret agent boom of the time. I think I have all the U.S. editions -- multiple copies of some of them, in fact.

But just to set the record straight, I checked my shelves and I don't have five or six copies of THE BAMBOO BOMB.

I have three.
Posted by James Reasoner at 11:53 PM

Even though he was a paperbacker and Horwitz not a very prestigious publisher, MacDonnell has been one of the most bestselling Australian authors ever. I've never read any of his books, but I plan to, when I get around to doing a book on Australian paperbacks.

Wise? Judy, for one, would question the wisdom of that remark. I think I have four or five of those "James Dark" books around here somewhere. I read all of them back in the day.

At least you might not buy another copy now that you've read the book. You notice I said might not instead of will not. Hey, at least there's always something to read around this house. I have no real complaints.

I don't think I've even seen a James Dark book in a bookstore for years now, so I think it's pretty unlikely I'll buy any more of them. But you never know what Half Price Books might have in their nostalgia section, and hey, if it was only a buck . . .

That's great! Love and agree whole heartedly with the wise man's quote! I'm even worse. There are a number of science fiction books that I read as a kid that remain favorites and if I find paperback copies in good condition, or even ones with covers different then the ones I have, I often buy them. Ostensibly I buy them so I have copies to give others...and sometimes I do...but more than that its the thrill I get of stumbling across these books again and I can't resist buying them.

The last book I bought that I already own was by L.J. Washburn. Maybe Livia wouldn't object to that.

Edward S. Aarons, now there's a name to conjure with. I should begin acquiring the titles I don't have. He gave me many hours of pleasure.

Speaking of the wise man's advice and Edward S. Aarons I ran across 7 of Aarons's books in very good shape for a buck each today and just couldn't resist buying them. At least I did know that I didn't already have them at home.

Danny, if those are your first Aarons books, you're in for a treat. Some of his novels are better than others, but he never wrote a bad book. Or if he did, I've never come across it.

Cap'n Bob, Of course it makes perfect sense when you're buying a L.J. Washburn book. I have a mystery coming out in October. Buy many, many copies.

James, yes these are my first Aaron's books and after I got them home I found that one of the ones I bought is the first of the series. I always like to start at the beginning of a series.

hi james! this is so ironic its funny i have to tell you about it. i am a singaporean who's a research assistant for a prof who's publishing a bibliography on col/post-col literature. i was desperately trying to locate the bamboo bomb (and it is NOT available in the national lib, singapore, the library of the national university, the malayan uni lib, NOR the british lib.) AND YOU HAVE (even if its not 5-6 copies), THREE! haha :)
well, at least now i know the book DOES exist. :)
cheers!