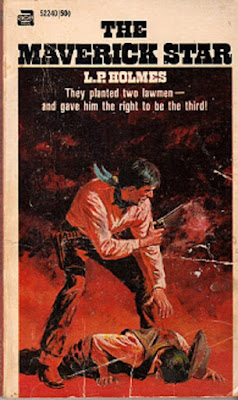 I usually read several L.P. Holmes novels every year. As I’ve mentioned before, he’s become one of my favorite Western authors, and since I came to his work fairly late in my life, there are still a bunch of his novels that I haven’t read yet. I won’t get to all of them, but he’s always reliable when I need an entertaining Western yarn.

The most recent one I’ve read by him is THE MAVERICK STAR, published as a paperback original by Ace Books in 1969. I’m pretty sure this isn’t a reprint of one of Holmes’ stories from the Western pulps, where he was very prolific in the Twenties, Thirties, and Forties. It begins with the funeral of a veteran lawman who, as sheriff, has kept the peace between two feuding cattle barons whose ranches are the biggest in the area. Each of those cattle barons has a hand-picked man he wants to replace the sheriff, but instead the job goes to the town marshal . . . who only packs the star for half an hour before he’s gunned down, shot in the back.

The county commissioners still don’t want to give the job to one of the other candidates, so they turn to Logan Keogh, the foreman of the other big ranch in the area. With considerable reluctance, Keogh accepts, knowing that he’ll probably have a target on his back, too. And sure enough, there are attempts on his life as he tries to keep the feuding cattle barons from going to war against each other and find out who killed the previous sheriff before the shadowy murderer succeeds again.

THE MAVERICK STAR is a well-paced traditional Western yarn with a little more of a mystery angle than some, and I don’t mind admitting that I didn’t figure out who the killer was ahead of time. The solution actually took me a little by surprise. The action scenes are excellent, although the book probably could have used a few more of them. By the time this book came out, Holmes had been a professional writer for more than forty years, and it’s not uncommon for an author’s work not to have quite as much fire and passion after they’ve been in the game for that long.

But like a good wide receiver in football who may have lost a step in speed, Holmes can still get by on savvy and experience. He knows what he’s doing, and THE MAVERICK STAR is a solid, entertaining tale that kept me turning the pages. I enjoyed it and think it’s worth reading if you’re a fan of traditional Westerns. That’s my beat-up copy in the scan, by the way.

Good story that appeared in Swedish translation in 1970 with Swedish title meaning 'The third sheriff'. Think his name was here spelled Logan Keogh.

You're right, I misspelled his name in the post. I'll fix that.

Thanks for checking! Just found out the same title was also published as ACE 52241 with another cover.