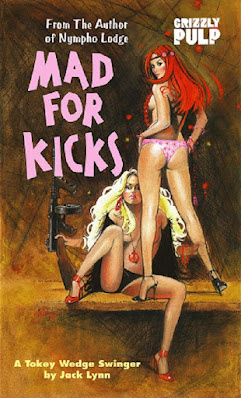 Pint-sized private eye Tokey Wedge returns in MAD FOR KICKS, published by Novel Books in 1960 and just reprinted by Grizzly Pulp. The novel opens on a grim note, with two young thugs raping a woman, and this brutal beginning tells us right away that this isn’t going to be as light-hearted a yarn as NYMPHO LODGE, Tokey’s debut.

Tokey is hired by the rape victim’s father to find the two men responsible for the crime. Actually, he wants Tokey to find them and kill them, but Tokey draws the line at outright murder. Instead, he takes the case and promises to turn the two rapists over to the police when he corrals them.

However, his investigation quickly uncovers something bigger. There’s a whole gang of thrill-criminals operating in the unnamed city where Tokey lives and works. They’re not just rapists, they’re also hold-up artists and killers, and in addition to the loot they gain, they’re also after the perverted kicks they get from their crimes. Tokey and his police detective buddy hatch a plan where Tokey will infiltrate the gang, discover who’s the mastermind behind it, and bring the whole degenerate bunch to justice.

Naturally, not everything goes according to plan.

MAD FOR KICKS is more of a crime/suspense novel than a mystery, and as such it’s a much bleaker tale than NYMPHO LODGE. Tokey is still quick with a wisecrack and beds multiple women in the course of the book, but mostly it’s a dark ride with plenty of suspense generated by Tokey’s dangerous masquerade as a professional assassin who falls in with the thrill-crazed gang. I got the feeling that author Max van derVeer was experimenting with this second Tokey Wedge novel, trying to decide what he wanted the series to be. I guess reading the succeeding volumes will answer that question.

I enjoyed MAD FOR KICKS. It races along at a satisfying pace, Tokey is still a very likable protagonist, and as always, it’s a great snapshot of the era in which it was written and published. Thanks to Grizzly Pulp for bringing it back with another great cover by Jim Silke. You can order it directly from the publisher.

My copy is due to arrive tomorrow. Looking forward to it, as I really enjoyed the first one!