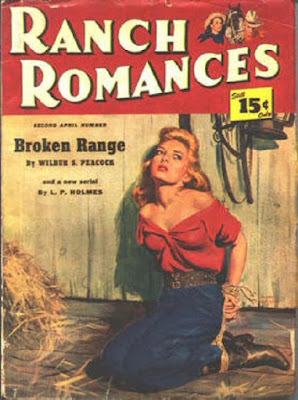 That's a pretty, um, sultry cover for a late Forties issue of RANCH ROMANCES. But not surprisingly, I like it. I don't know who the artist was. Inside this issue are stories by some excellent authors, including L.P. Holmes, Wayne D. Overholser, Ray Townsend, Wilbur S. Peacock, and Walt Sheldon. Clearly RANCH ROMANCES was starting to take on some of the hardboiled tone that was common in it during the Fifties.
Posted by James Reasoner at 4:00 AM

Were these Romance themed Westerns targeting female readers, or were men of that era more likely to read magazines with Romance in the title?

I would bet that most of them were bought by female readers, but their husbands (if they were married) read them, too. The names of the magazines, plus the features they ran, were targeted toward women, but the fiction itself seems to have been aimed at a general Western audience of both men and women. One thing I've noticed in the letters columns of, say, TEXAS RANGERS, is that there were quite a few letters from female readers. Of course, those were only the ones printed and not representative of the entire readership or even of the readers who wrote in to the magazine.

Seems to me like there was an awful lot of Kink riding the range back then. Do these always feature somebody tied up?

That particular situation does seem to show up pretty often.