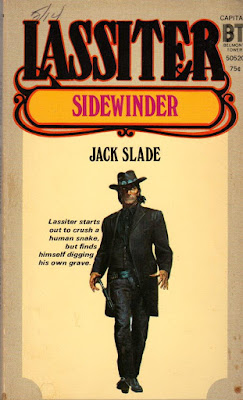 Many people consider the Slocum series, published originally by Playboy Press under the house-name Jake Logan, to be the first Adult Western series, but I believe that’s incorrect. The Lassiter series, published under various imprints by Belmont/Tower/Leisure under the house-name Jack Slade, started in 1968, eight years before Slocum and included all the elements of an Adult Western: sex, a gritty, violent tone, and a somewhat amoral protagonist. True, the sex scenes usually aren’t as graphic as the ones to be found later in Slocum and other Adult Western series, but they’re definitely there, and the violence and shades-of-gray characterizations are in full force.

A lot of this goes back to the pulp SPICY WESTERN. As far as I know, W.T. Ballard, who created the Lassiter series and wrote the first four books, didn’t write for SPICY WESTERN, but his good friend and occasional writing partner Robert Leslie Bellem did, and as a prolific professional pulpster, Ballard certainly would have been aware of the magazine even without the Bellem connection. So my contention is that the whole Adult Western paperback sub-genre can be traced back to the pulps and is largely the creation of one man, W.T. Ballard. (I expound more on this in my introduction to LUST OF THE LAWLESS, a fine collection of the stories Robert Leslie Bellem wrote for SPICY WESTERN.)

The Lassiter series ran until 1981 with several different writers authoring the novels as Jack Slade. The most idiosyncratic of them, at least as far as his writing style goes, was probably Frank Castle, who turned out the Lassiter novels SIDEWINDER and THE BADLANDERS. Castle wrote for the pulps and also wrote several Westerns and crime novels for Gold Medal during the Fifties. (I think the Gold Medal hardboiled Westerns also had an influence on the Adult Westerns.) I read THE BADLANDERS a number of years ago, and I have to confess that I misattributed it to Tom Curry, another veteran pulp Western author who wrote a couple of the Sundance novels under the Jack Slade name. It’s clearly Castle’s work, though, as proven by Lynn Munroe.

Which brings us, at last, to SIDEWINDER, which I read not long ago. Lassiter is a drifting gun-for-hire and sometimes outlaw, and as this book opens, he’s south of the border in Mexico, being forced to dig his own grave by the firing squad that’s soon going to execute him. It’s a great opening, and Castle never slows down the action and suspense as he gives us the back-story while we go along. It seems that Lassiter was hired by Homer Brill, an American mining tycoon in Arizona, to travel into Mexico and collect on an I.O.U. that’s owed to Brill by General Juan Peralta, a local strongman who also owns a gold mine. Instead of paying the debt, Peralta loses his temper and orders Lassiter shot.

Of course, Lassiter escapes and quickly discovers that all is not as it appears to be at first. Conspiracies and double-crosses abound. Everybody’s after a fortune in gold and nobody can be trusted. As you’d expect from a novel set in Mexico during the late 19th Century, political intrigue and revolution play large parts in the plot as well. And of course there are a couple of beautiful women involved, and Lassiter beds both of them when he’s not busy running around shooting and getting shot—and knifed—and blowing stuff up real good. Lassiter wants to get his hands on some of that gold, but it’s even more important to him that he settle some scores with men who crossed him.

Castle has an odd, choppy, comma-heavy, and sentence-fragmented style that takes some getting used to. Once you do, however, it works pretty well and produces some vivid scenes. He also has a good grasp on Lassiter’s character. Lassiter isn’t a typical Western hero, but he has a number of opportunities to be even less sympathetic but winds up doing the right thing instead. He’s not necessarily a guy you’d want as a friend, but you certainly don’t want him as an enemy, because he finds a way to just keep fighting until he wins.

I’d say SIDEWINDER is about in the middle when it comes to the Lassiter series. I’ve read much better books in the series, but I’ve read worse, too. That may seem like I’m damning with faint praise, but that’s not my intention. I enjoyed reading SIDEWINDER, and I think most Adult Western fans would, too. Just be aware that Castle’s prose is definitely off-trail.

(The image above is my copy, the one I read. There's an earlier edition from 1969, but I don't own that one and wasn't able to find an image on-line.)

UPDATE: Here's the cover of that first edition, provided by my friend Kurt Middleman. 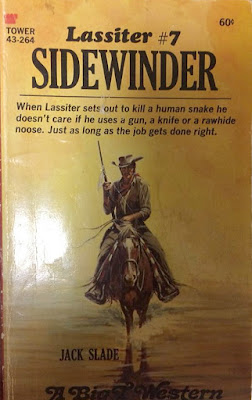 I pick up those LASSITER books whenever I find them. Fun reading if you're in the mood for a violent Western.

I have never heard of the series. I do enjoy reaLIZING novels but have not read any in a while.

Stupid autocorrect. That should say, "I do enjoy reading the SLOCUM novels but have not read any in a while."