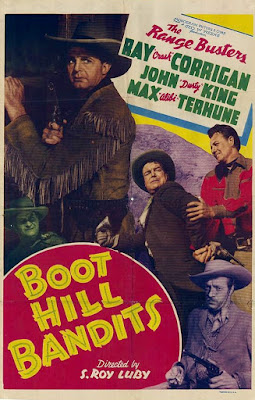 My B-Western binge continues with BOOT HILL BANDITS, a 1942 entry in the Range Busters series. The Range Busters were a poor man's Three Mesquiteers that two out of the three most well-known stars from that other series did for Monogram. Ray "Crash" Corrigan and Max Terhune (playing a character named Alibi instead of Lullaby) are on hand, but John Wayne/Robert Livingston have been replaced by John "Dusty" King, quite possibly the frailest-looking screen cowboy ever, and yes, I am including Don Knotts in that.

The plot of this one is a hard-to-follow mess. Veteran B-Western heavy John Merton is the head of an outlaw gang pretending to be an honest businessman. Corrigan rides into town, deals harshly with some bad guys, and has the marshal's job pressed on him. He uncovers the fact that Merton is behind all the villainy in the area. Or he knew it all along and was after Merton to start with, I'm not sure. Terhune and King show up to help him because, well, they're fellow Range Busters.

Despite a mostly poor script, BOOT HILL BANDITS is worth watching for a couple of reasons. There's some unexpected dark humor here and there, especially a bit involving some gravestones, and Glenn Strange, also a veteran heavy before he became Sam the Bartender on GUNSMOKE, turns in a bizarre, genuinely creepy performance as a brain-damaged gunman. A couple of years later, Strange began playing Frankenstein's Monster in the Universal series, and his part in this movie reminded me of that. I can't help but wonder if his portrayal of that iconic creature was influenced in any way by his role as The Maverick (the character's only name) in BOOT HILL BANDITS. That right there is enough to make me glad I watched this one.
Posted by James Reasoner at 6:00 AM

"A hard-to-follow mess" is a good summary! I got completely lost about halfway through. I can't recall seeing any of the other Three Mesquiteers movies so perhaps I'll give them a second chance. I liked the ventriloquist scene!
IMDB says that Ray "Crash" Corrigan starred in 24 of these. A lot of the Western actors were extremely prolific, a bit like some Western authors!

All of the Three Mesquiteer movies with Corrigan, Terhune, and either John Wayne or Robert Livingston as Stony Brooke are worth watching. Some of them are based on the novels by William Colt MacDonald, who created the characters.

Watched this on Internet Archive and really enjoyed it. Was familiar with Three Mesquiteers but not this series. Searching Ray Corrigan led me to White Gorilla and all I can say is "wow".