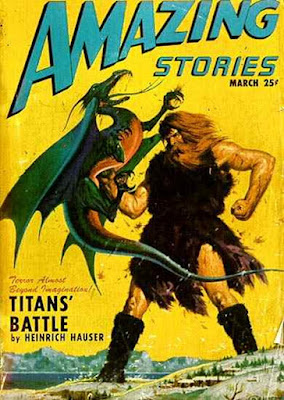 The late Forties issues of AMAZING STORIES aren't noted for their fiction. This one has stories by Richard S. Shaver (heard a lot about him, never read a word he wrote), Leroy Yerxa, John and Dorothy de Courcy, and Heinrich Hauser, a German author who wrote only three novels. But it certainly had some eye-catching covers. I mean, look at this one by Robert Gibson Jones. A giant Viking punching a dragon in the belly. I repeat, a giant Viking. Punching a dragon. In the belly. Perhaps not the coolest thing ever, but probably in the top ten. You can bet I would have bought this one if I'd seen it on the newsstand in 1947.
Posted by James Reasoner at 5:30 AM

AMAZING was terrible during this period. I once made the mistake of reading one of the Richard Shaver novels and I still haven't recovered. Two books were recently published detailing the gruesome events that led to Ray Palmer turning Shaver into a short lived success.

Do yourself a favor if you value your brain cell James, NEVER read anything by Shaver. I have some of these late 40's issues of Amazing that I bought over 40 years ago and I have a hunch I would have to give them away. I doubt anyone would want to buy them

Sometime in the mid- to late '50s, Amazing or Fantastic had a "Shaver Issue." I didn't know anything about the Shaver stuff at that time, but I read everything in the issue, just as I read everything in all the other issues. It was truly strange stuff, and I got a kick out of it.

Shaver's an interesting case. Probably a true paranoid schizophrenic, his first rambling missive to AMAZING got rewritten by Palmer into a novella instead of the "oh god, underground aliens are talking to me through arc welders" Shaver had originally written. I've read some reprints of Shaver's later fiction and while it's not great, it's at least "off the beaten path" space opera.

I'm rooting for the dragon.

I love that blurb: Terror almost beyond imagination! It looks like the viking is readying his left for a finishing blow. Dragon Stew is on the menu for dinner tonight.

What is the weirdest Shaver story? And the best if it is not the weirdest. This guy sounds kind of like an outsider artist in the pulps, and that interests me. Arthur J. Burks certainly has that feel, and I relish the cornucopia of creativity that is the maligned master of utterly improbable, atmospheric, hilarious crazy mysteries, Harry Stephen Keeler.

Despite being warned not to read Shaver, I'm just contrary enough to do so, so I plan to risk my sanity and delve into his work in the near future. I have an issue of AMAZING from the late Forties with one of his novellas in it, and I also broke down and bought a copy of this issue, mostly because of the cover. So we'll see. I also need to read those two books about Ray Palmer and Shaver.

I've enjoyed what I've read by Arthur J. Burks, which isn't really that much. Keeler I've never tried, despite many, many recommendations over the years from numerous of my friends.

Harry Stephen Keeler is unique and impossibly creative. Riddle of the Traveling Skull and The Case of the Two Strange Ladies are great places to start. For humor, creativity, and craziness, Keeler has no peers of which I am aware. The former book is better and creepier, but the latter contains the single best plot twist I've come across in any fiction EVER. The only thing that I've ever read that reminded me of Keeler was The Red Right Hand by Joel Townsley Rogers, a very good book, though less funny and bizarre. The humor and hyperbolic characterization of Mervyn Peake also come to mind.

Here are two short reviews I wrote of those Keeler books for anybody who is interested:

I look forward to seeing Reasoner reviews of Shaver. It sounds like it'll be memorable, even if it's terrible.

I think it's a great idea for a cover, but te execution seems a bit stiff and unimaginatively laid out.

Okay,can someone tell me if Shaver is really comparable to Keeler? If so, I shall have to seek him out.

In my opinion no way is Shaver comparable to Keeler. Keeler had a plan, a style, a career as an author. He was writing for many years. But Shaver was just a weird flash in the pan and much of his fiction was reworked by Palmer, the editor at AMAZING. Without Palmer, Shaver would never have published anything. Finally the Shaver boom went bust and the circulation fell to the lower levels at Amazing.

Shaver struck me as maybe someone with mental problems and he couldn't really write without Palmer revising the stories. Keeler may have written strange fiction but he was a legitimate author.

I would probably go with the original that started it all, "I Remember Lemuria!" In which Shaver is "recalling" his past life as Mutan Mion, a member of the "Titan-Atlan" race that colonized earth millions of years ago. He finds love (with a gal with hooves and a tail), uncovers a plot to overthrow the government, and ends up leading the strike force from space to reclaim the city from the Dero, degenerate members of the species driven mad by the sun's rays.