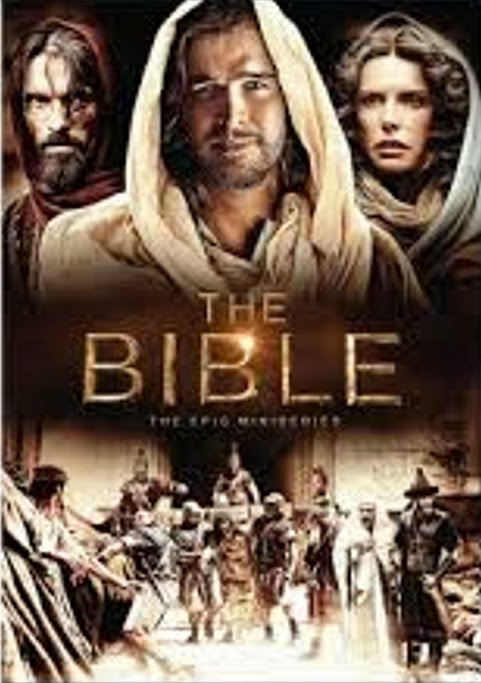 This ten-hour miniseries aired on the History Channel a couple of years ago and got high ratings, but we didn't see it until now, qualifying it—sort of—as overlooked, I suppose. I grew up in a family of staunch Baptists and went to Sunday school nearly every week for years and years, so I was curious to see how much I remembered. Turns out, nearly everything in the series was familiar to me.

The first half covers the Old Testament, starting with Noah, and since there's a lot of ground to cover the pace moves pretty fast through Abraham, Sodom and Gomorrah, Moses and the flight from Egypt, Joshua and the battle of Jericho, Samson and Delilah, David and Bathsheba, Solomon, and so on. One of the complaints about the series that I read on-line is that too much was left out. I'd say maybe too much was left in for the time that was allotted, because it seemed that no sooner did one storyline get started good than there would be a graphic on the screen reading "40 Years Later". Still, there's some good stuff here, mostly notably for me some sword-fightin' ninja angels in the Sodom and Gomorrah section. In fact, all the angels in this series are pretty much badasses, which I like. (Something else that was roundly criticized on-line, by the way.)

The second half deals with the New Testament and focuses primarily on Jesus's life, and I think it was a little better because of that ability to delve more deeply into one story. A Portuguese actor named Diogo Morgado plays Jesus and does a fine job, I thought. (There are no actors in this mini-series you've ever heard of with the exception of Roma Downey, who was also one of the producers with her husband Mark Burnett, the SURVIVOR guy.)

The production values are pretty high throughout. Everything looks right. The special effects aren't spectacular, but they work. Despite all that time spent in Sunday school, I'm no theologian, so arguing about what got put in, what got left out, and how this particular event was interpreted doesn't mean a whole lot to me. I thought that overall THE BIBLE was both entertaining and moving, although I wouldn't put it in the top rank of Biblical movies. In fact, I'm not sure what films actually are in the top rank of Biblical movies. THE TEN COMMANDMENTS? THE ROBE? It's been too long since I've seen any. I don't have any idea how they'd hold up.
Posted by James Reasoner at 5:30 AM

James - Nice post. I enjoyed this series very much and, like you, appreciated the "bad-assedness" it presented in the Old Testament parts, as opposed to the over-sanitized treatment we have seen in some previous cinematic endeavors. It made it more powerful ... Although I am not overly devout I nevertheless believe in Judeo-Christian values and encouraged my whole family to watch this series when it was playing. I think we were the better for it.

I think the best Bible-based movie is Jesus Christ, Superstar. Most others i've seen are, to borrow a charicterization from Wayne, "sanitized".