There I was, in the mood to read another Orrie Hitt novel, when what should arrive in my mailbox but an advance copy of the latest Stark House double volume, THE CHEATERS/DIAL "M" FOR MAN, by none other than Orrie Hitt. This book will be out in October, and it features not only the two novels but also a fine introduction by Brian Ritt (a revised version of his essay "The Sleazy Side of the Street", which first appeared on this blog), and an equally fine afterword and Hitt bibliography by Michael Hemmingson. As someone who played a small part in reviving interest in Hitt's work (along with Frank Loose, who produced a fine blog essay on Hitt's novel I'LL CALL EVERY MONDAY), I'm very happy to see these two novels reprinted and hope that the book sells well enough to warrant more Orrie Hitt reprints. 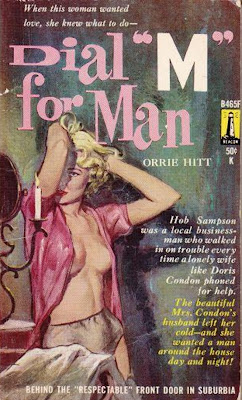 But in the meantime, I'm going to stretch a point and call Hitt's DIAL "M" FOR MAN a Forgotten Book, because the Stark House volume isn't out yet and this novel has been out of print since its original Beacon Books edition in 1962. Of the two books in the reprint volume, I chose to read this one first for a very personal reason: the protagonist is a TV repairman.


Now, some of you already know that my dad was a TV repairman for many years. In the early Fifties, sensing how popular TV was going to be and realizing there would be a need for people to work on them, he took a correspondence course in TV repair and then went to a trade school in Kentucky for six weeks to get some hands-on experience. He was already working in the aircraft industry and continued to do so for many years, but he also fixed TVs as a sideline, so I grew up around torn-apart TV sets, vacuum tubes, soldering irons, and more extension cords than you've ever seen in your life. (A bit of wisdom from my father: "If you ever fall out of an airplane, try to grab an extension cord. It'll get tangled and hang up on something before you hit the ground." He also taught me that if you take a TV apart, all the screws that came out of it don't necessarily have to go back into it, because "it ain't goin' anywhere.") I never really took to TV repair myself, although I worked for him for a while and got considerably better at it than the average person. I could diagnose and repair maybe half the problems I encountered.


Anyway, I could go on, but this is a Forgotten Books post, not an autobiography. At one time in Orrie Hitt's life, he also worked as a TV repairman, and I can tell you, he really nails that background in DIAL "M" FOR MAN. Dealing with the public, keeping up with the work in the shop and the service calls, the difficulty getting parts, trying to make ends meet . . . it's all there. I'm not sure anybody was ever better than Hitt at capturing the details of everyday life for struggling blue-collar workers.


Like a lot of prolific writers, Hitt would usually fall back on a specific set of plot elements, and that's true here. The protagonist is torn between two women, he struggles economically, there are forces beyond his control conspiring against him, an unwanted pregnancy crops up, the possibility of murder begins to look more and more appealing . . . The trick that Hitt pulls off consistently is to take these plot elements and work changes on them, which he does to nice effect in DIAL "M" FOR MAN. I've read enough of his novels by now that I knew where the story was going to end up, but I didn't always know how it was going to get there. Anyway, what makes Hitt's novels well worth reading are those little touches of everyday life and the sheer desperation that grips his characters as fate clamps down on them. If you want a true picture of certain segments of society in the Fifties and early Sixties, I suspect you're more likely to find it in an Orrie Hitt novel than in most of the mainstream fiction of that era. To see what I'm talking about, you can pick up this Stark House volume when it becomes available.


Heck, I'll bet you can even go ahead and pre-order it if you want to. Now, hand me that solderin' iron. Got a loose connection here on this resistor . . . or maybe it's that dang horizontal output tube . . .
Posted by James Reasoner at 6:00 AM

We did our own TV repairs. My dad showed me how to change tubes in the back of our giant console TV. Rarely called a TV repair guy though I know they were still around in the 70s for a while before tube style TVs went the way of the dodo bird.

Never read an Orrie Hitt. Stark House also reissued some Richard Powell books, didn't they? I'll keep my eye out for this one.

I'm always amazed at the kiunds of covers that appears on 50s and early 60s paperbacks compared to what they run today. Was it that paperbacks back then were mostly sold in bus stations and only men went to bus stations? Or did they just not care how women felt about all that nudity?

Great blog, James. Loved the TV repairman story of your dad. I used to see their shops around, but that's a thing of the past, I suppose.

My first real job was for GE in White Plains, NY. They repaired TV's in the back, had an appliance parts section in the center, and an office up front that scheduled service calls. I hung out in the TV repair section once in a while and learned enough to know that the AGC tube was often the culprit in my set, and my sister's method of spinning the dial and hard and fast as possible caused it to be off kilter.

I hope Stark House ships some of the Orrie Hitt reprints to India so that I get to read them. Hitt would be a first for me, like so many other writers I have read about on your blog. Radio and TV repairmen were in great demand in the 1970s and early 1980s. You could be one or both by simply taking a six-month certificate course. My dad used to fix the wonky image on our B&W set by giving it a good thump on the side. Crude but effective. Pity it doesn't work on PCs. About the screws not going back into the TV set, yes, I remember that quite well. Now I find that they don't have to go into my CPU either!

Just ordered it James,1st heard of Orrie Hitt on your blog,ordered some .99 cent e-books enjoyed them. james maybe you should write an autobiography,you tell such great storys.Your fans will definatley buy it.

James - Another good post. One of my first non-farm jobs was working in an Admiral TV factory in Harvard, Illinois. At first I tested anode leads on the full-model assembly line --- I used to get zapped (sometimes nearly on my ass) about half a dozen times a night. Then I moved to the printed circuit line, which was a lot more fun ... So much fun, in fact, I met Pam, my wife-to-be, there.
Thanks for stirring up some good memories.
Plus I've been an Orrie Hitt fan for years (his were the first "adult" paperbacks I began buying based on the byline rather than which one had the sexiest cover).
Persevere --- WD

Wayne,
You couldn't consider yourself a TV man until you'd been shocked at least a dozen times. By the time he'd been at it a few years I'm not sure my dad even felt it anymore.

Thank you for your interesting and funny blog! Here you can watch the original illustration work by Al Brule: