This is another one where I’m going by memory and IMDB, since I haven’t seen any episodes of this series in 50 years. It ran in syndication in 1960 and ’61, which means I was in the second grade when I watched it. That just goes to show that my fondness for private eye fiction goes ‘way back. Although to be fair, I loved any show that featured gun battles and fist fights. I was a bloodthirsty little tyke.


Anyway, THE BROTHERS BRANNAGAN were Mike and Bob Brannagan, private eyes who operated out of a resort hotel in Phoenix, where the series was filmed. One season, 39 episodes of wearing narrow ties, tooling around in cars with fins, and fighting crooks. And I still remember the theme song, which means I must have watched the series regularly. 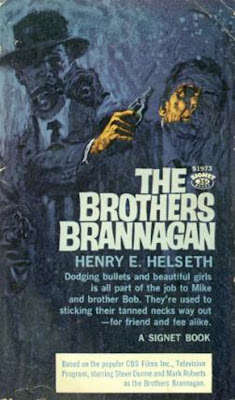 Years later when I was in high school, I ran across a used copy of the TV tie-in novel based on the series (it’s amazing to think that a low-budget syndicated show could get a tie-in novel from a major paperback publisher like Signet, but it wasn’t that uncommon back then), titled, appropriately enough, THE BROTHERS BRANNAGAN and written by one Henry E. Helseth. Helseth doesn’t seem to have been very prolific. He has one other TV tie-in to his credit, a novel based on the series THIS MAN DAWSON (which I don’t think I ever saw) and a mystery novel from the late Forties. I don’t remember anything about his Brothers Brannagan book except that I read it and wasn’t impressed by it.


If anyone has seen any episodes of THE BROTHERS BRANNAGAN recently, I’d love to hear about it. I’d like to think it was a good show, since I remember it fondly, but I’m not going to hold my breath waiting for confirmation of that.
Posted by James Reasoner at 6:00 AM

Watched it. Can't remember it.

Bought the paperback when it came out. Read it. Can't remember it.
Sic transit...

According to HARRY AND WALLY'S FAVORITE TV SHOWS, there were 39 episodes from 1960-1961. "From the early 1960s, long before wisecracking private eyes became the rage, the brothers Brannigan swar smart remarks and operate a private-eye operation in Phoenix, Arizona (then a very unlikely setting fo a TV series)."

The TV tie-in book is interesting. I guess Signet published it on the chance the series might take off and make everybody some money.

These days a TV show has to demonstrate it has a lot of readership potential by being successful for several years before a publisher will take a chance on tie-in novels. In the Sixties it was just the opposite, with tie-in novels timed to appear either at the same time or even before a TV series' debut. That's why there are differences between the first book in a tie-in series (Mike Avallone's Man From U.N.C.L.E. novel, for example) and the show itself. Mike was working from a series bible and probably never saw any actual footage from the show before he wrote his book. I think I kind of prefer it the old way, because it led to some interesting oddities like the Brothers Brannagan novel and Frank Kane's Johnny Staccato novel.

Both THE BROTHERS BRANNAGAN and THIS MAN DAWSON have quite a few episodes available on DVD in the collector-to-collector market. Try ioffer.com.