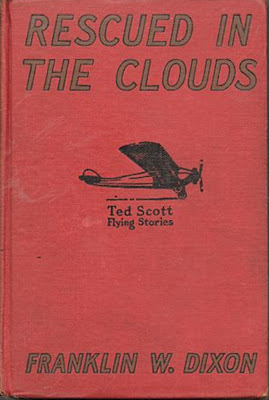 A couple of weeks ago there was some discussion in the comments on one of the posts about the Hardy Boys series. I remembered that while I don’t have any of the original Hardy Boys books on hand (or any of the newer ones, either, for that matter), I do have several books in another series by “Franklin W. Dixon”, so I decided to read one of them.


The Ted Scott Flying Stories were launched about the same time as the Hardy Boys, and according to what I’ve read on the Internet, Ted Scott, dashing young aviator, was even more popular than Frank and Joe for a while, with the books about him outselling the Hardy Boys novels. Ted Scott is a pretty blatant fictionalization of Charles Lindbergh, to whom the books are rather brazenly dedicated, along with a number of other early aviators. The first book in the series, OVER THE OCEAN TO PARIS, has plucky young flier Ted Scott becoming the first man to fly the Atlantic and becoming America’s hero in the process. I don’t have that one, but I do have RESCUED IN THE CLOUDS, the second book in the series, and it picks up with Ted returning to a hero’s welcome in his Midwestern home town, only to run afoul of some old enemies.


The plot of this novel really meanders around, as Ted has a series of adventures centered around flying. He stops a train from crashing off a bridge that’s collapsed. He organizes an air show to raise money to build a hospital. He locates a witness against the con man who swindled his elderly foster parents out of a fortune. He rescues flood victims, performs a daring mid-air rescue of two men from a burning plane, and even (attention Bill Crider!) fights alligators. But no matter what the odds against him, Ted Scott never gives up and fights on with a smile on his face, because Ted Scott is nothing if not stalwart.


The writing in this book is really old-fashioned, not surprising since it was published in 1927. It’s hokey, melodramatic, and driven by incredible coincidences. And yet RESCUED IN THE CLOUDS has its moments. Some of the flying scenes, if put on film, would make spectacular stunts. There are also some nice satiric bits about the commercialization of heroes and how everybody but Ted Scott tries to cash in on his fame. According to one website, the actual author of these books was someone named Frank Duffield, whose only other publications seem to be in the field of non-fiction about coin collecting. He certainly wasn’t a polished writer, but as I said above, at times there’s some decent yarn-spinning in this book. As far as I know, Duffield didn’t write any of the Hardy Boys books as Franklin W. Dixon, but he may have done other boys’ series work for Edward Stratemeyer.


While most readers today probably wouldn’t make it very far in a book like this, those old boys’ series novels are, in their own way, historical documents. This one gives what’s probably a pretty accurate picture of the adulation that greeted Charles Lindbergh on his return to the States. And as creaky as it may be, it has a certain charm to it. I may never read another Ted Scott Flying Story, but I have to admit, I’m a little curious about what happens in the next one, OVER THE ROCKIES WITH THE AIR MAIL, OR TED SCOTT LOST IN THE WILDERNESS. Gee whillikers, I wonder if good old Ted will survive?
Posted by James Reasoner at 6:00 AM

I wonder if these books will ever show up as ebooks. I recently read a Tom Swift novel from the same era as RESCUED IN THE CLOUDS. I had pretty much the same reaction as you did.

Yes, I think many of them will show up as e-books. I picked up the full run of the first Tom Swift series as e-books earlier this year.

A quick check shows the OVER THE JUNGLE TRAILS, a 1929 Ted Scott book is available at Internet Archive.

I never loved the Hardy Boys books I came across as a youngster, of any of their impulpations, but approaching a book like this as a curio might indeed make for an engaging read...

The Hardy Boys never appealed to me, either, but this sounds fun.

I recently read a Tom Swift Junior book, "T.S.jr, on the Phantom Satellite" and was struck by the relentless pace of (largely trivial) incidents. It was like a crisis on one page, crisis resolved on the next and a new crisis on the thirsd page. Not at all a very satisfactory book. A another book in the series "Race to the Moon seems less afflicted by this kind of churning.

Another forgotten series by Statemayer is "Don Study" a boy explorer who travels all over the world with his two uncles. It's kind of like a Young Indiana Jones series

Other websites credit the Ted Scott series not to Frank but to John W. Duffield, who wrote 115 or so Stratemeyer Syndicate house name books between 1916 and 1936 -- in series such as Don Sturdy, The Radio Boys, and The Army Boys. His best-remembered series (in this case writing as "Roy Rockwood") was Bomba the Jungle Boy. Bomba was still in print in the early 60s, and got a comic book series from DC around 1966 to tie in with the TV syndication of the Johnny Sheffield movies.

Martin,
John Duffield being the author rather than Frank makes a lot more sense. Thanks for the info! I read all those Bomba books when I was a kid but don't remember much about them.

Just found and read a few of another boys series - by H Irving Hancock.

Usual series - about a bunch of six boys in grammar school and then high school, after which two go to west point, two to annapolis (both passing out just in time for the mexico war, some operations in the philippines and then the first world war). Another two become railroad and mining engineers in the "new west" shall we say - nevada, colorado etc in 1910-1914.

There's some pretty fast paced action and the usual predictable, formulaic storylines, the obligatory deadly enemy and a high school sweetheart each for love interest .. but the annapolis and west point stories have a wealth of detail that rings mostly true.

There's also the usual, almost unconscious, bigotry (a very decided sense of superiority about mexicans, filipinos, italians, blacks..) but then I'll put that down to the times the books were written and set in.

Interesting. I will have to look into this more. Since i was a Hardy Boys fan in younger days.

Ted Scott sat on my shelf for over 20 years unread. All I could think of was TheHardy Boys Great Airport Mystery (not a good book). But I was pleasantly surprised at the Tedster. Lots of rough and tumble action. Ted is a bit too humble for my taste, but the books certainly are readable.