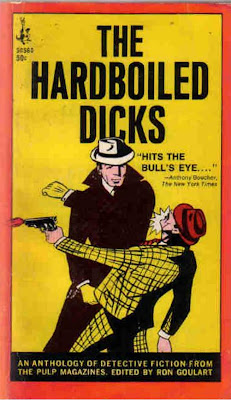 Like it was yesterday, I remember it: a very foggy December evening in 1967. I was 14 years old, and when my mother went to Seminary South with my older brother and my sister-in-law, I tagged along. Seminary South was the first major shopping center in Fort Worth, built in the mid-Sixties as an open-air mall much like the various outlet malls that now sit beside many of the Interstate highways. It was on Seminary Drive in south Fort Worth, hence the name. The main attraction it held for me at that time was a small bookstore called The Book Oasis. I was able to stop in there for a little while that night, and while I was there I found a book I knew I had to have. It had a bright, pop-art style cover that showed a strong-jawed guy in a fedora socking a thug. The title?

THE HARDBOILED DICKS, of course.

By this time I was fairly familiar with the concept of the pulps from reading Doc Savage novels and the Lancer editions of Robert E. Howard’s Conan stories. I even owned a pulp, a 1931 issue of DETECTIVE FICTION WEEKLY that I had picked up in Thompson’s Bookstore in downtown Fort Worth a year or so earlier. (In those days you could still buy tons of Gold Medals and Dell mapbacks from Thompson’s for ten cents each – and I did.) THE HARDBOILED DICKS was my introduction to the sort of fiction to be found in BLACK MASK, DIME DETECTIVE, and other hardboiled detective pulps. Originally published in hardcover a couple of years earlier, it was reprinted in paperback by Pocket Books and had a great introduction by Ron Goulart.

But it was the stories themselves that grabbed me immediately and wouldn’t let me go. What a line-up of stories, authors, and characters:

I knew that Lester Dent was really “Kenneth Robeson”, the author of many of the Doc Savage novels I was reading and loving every month, and of course I’d heard of Erle Stanley Gardner, having read some Perry Mason and Donald Lam/Bertha Cool novels already. Frank Gruber’s name was vaguely familiar to me. But the rest of those guys were brand-new, as far as I was concerned. When I read the stories, I loved them and wanted more. As much as I could get my hands on, in fact. Oddly enough, the stuff wasn’t as easy to come by then as it is now, at least not to a kid in a small town in Texas.

That copy I bought at The Book Oasis in 1967 was lost in the fire a couple of years ago, of course, but I knew that THE HARDBOILED DICKS was one of the books I had to replace. And having a week for Forgotten Short Story Collections was the perfect excuse to sit down and reread it (although, technically, most of the stories in this book are novelettes, not short stories). I was interested to see whether or not they would hold up after all these years.

The answer is simple: Boy, do they.

I recall that on reading them the first time, I didn’t like Gardner’s Lester Leith story or Whitfield’s Jo Gar story as much as the others. They’re good, just not as good as the others, plus the Gardner story isn’t particularly hardboiled. Rereading them confirmed that, but they’re still great fun. The stories by Norbert Davis, John K. Butler, and Richard Sale are all fast-paced and very funny in places. I’m always amazed by how much plot pulp authors could pack into a story. Frederick Nebel’s “Winter Kill” impressed me even more this time around. A lot of people say Nebel was almost as good as Dashiell Hammett, and I agree with that. Frank Gruber’s story about Oliver Quade, the Human Encyclopedia, is so good that I’ve already ordered a replacement copy of BRASS KNUCKLES, a collection of Quade stories that came out a year or so after THE HARDBOILED DICKS. It’s another old favorite of mine that contains a long introduction about writing for the pulps that Gruber expanded into his book THE PULP JUNGLE. And then of course there’s Dent’s “Angelfish”, one of two stories he wrote for BLACK MASK about private detective Oscar Sail. These are classics and deservedly so, and in rereading “Angelfish” I was more impressed than ever with Dent’s use of language. It’s just a great yarn. As a matter of fact, that description could be applied to any of the stories in this book.

Seminary South existed much like it was then until sometime in the early Eighties, although The Book Oasis went out of business years earlier. I remember going to Seminary South with Livia several times during the first few years of our marriage. Then somebody got the idea of enclosing it and making a regular mall out of it, and the place lost most of its charm as far as I’m concerned. Now it’s been at least twenty years since I’ve been there, probably longer. I think it still exists in some form, although it’s gone through numerous remodelings and name-changes, but I’m not sure about that.

I know, though, that it still exists vividly in my memory, along with The Book Oasis. I bought other books there over the years, but THE HARDBOILED DICKS was the best. If you like pulp detective yarns, it gets my highest recommendation. You can find copies fairly inexpensively on-line.

Of course, that won’t be like picking it up brand-new and flipping through those red-edged pages and knowing that you’d found something really wonderful. You had to be there for that, and I was. Yesterday, it seems.
Posted by James Reasoner at 6:00 AM

Non-readers can never understand the joy we get from poking around in bookstores and stumbling across that treasure you didn't know existed, or that you wanted, until you actually see it. At sixty years of age, I don't think that joy has abated one whit.

I have copy of "The Hardboiled Dicks." Had it for years and only read the Gruber story. That was a long time ago. I have a bad habit of reading one or two stories in an anthology and then starting something else. I have this notion that I will go back and read another story in the near future, which never seems to happen.

I'll dig out the paperback. (If I can locate it) I've always loved Sale's Daffy Dill character. I need to read that one!

THE HARDBOILED DICKS ranks up there with Cap Shaw's THE HARD-BOILED OMNIBUS and Herbert Ruhm's THE HARDBOILED DETECTIVE on my list of favorite pulp-PI anthologies, in part because of sheer quality, in part because it was the first such I ever read too. A "forgotten article" to go along with this forgotten book -- Ron's article "The Private Eye," a survey of the PI genre, from Daly and Hammett to Spillane and Ross Macdonald, in the short-lived magazine PS in 1966.

This sounded so familiar I had to check, but if I have it it never got cataloged into my database. I've ordered it before the rush of others reading this fine review and picking up all the copies. Thanks, James!

This was a classic collection that fed my hardboiled fiction addiction. I enjoyed all the stories in this book and have recommended it to others over the years. Great choice!

Great choice, James. After reading this one I started collecting the works of all the authors included - and very nearly moved to San Francisco to have access to the amazing pulp fiction collection in Bill Blackbeard's museum.

Thanks for remembering and relaying how you came to it. That's my favorite part-why a book meant something to you.

Having spent last weekend at the Windy City Pulp & Paperback Show, I can tell you that this book came up for discussion any number of times -- and almost always in the context of What book or magazine was it that started your obsession with collecting pulps?

Goulart's role in helping refocus attention on this mode, among other pop-culture revival, is not given enough attention. But, then, his own fiction isn't, either.

Exactly right about Goulart, Todd. been a fan for years and when I picked up the first Shatner Tekwar out of curiosity, I knew right away who the real author was behind the "star's" name. For that reason, I stuck with and enjoyed them all. His twelve Avenger novels that he added to the canon were superior to the original pulps also. And the Phantoms he ghost wrote for Lee Falk. I could go on and on.a

I'm a big fan of Ron Goulart's John Easy detective novels, If Dying Was All, Too Sweet to Die, The Same Lie Twice and One Grave Too Many. I've met him a couple of times, worked with him once on a project, and interviewed him during his Star Hawks period (which I should probably post at some point). Just a great guy and an excellent writer.

I read all of those John Easy novels by Goulart and liked them a lot.

James & all: I appreciate the kind words about The Hardboiled Dicks. It was my first book. It was inspired my an article I'd done for a men's magazine. My honorary mentor Anthony Boucher had given the piece a favorable mention in his NYTimes review column and I parlayed that into a book contract with Sherbourne Press, where my friend William F. Nolan had an editor friend. Now if only somebody would one of my books that's still in print. Best, Ron Goulart