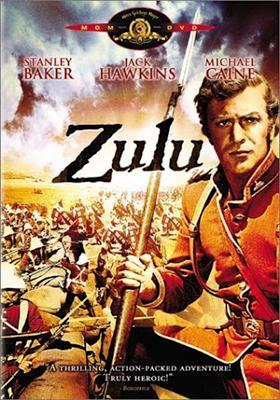 ZULU is a John Ford cavalry Western. Oh, I know John Ford didn’t direct it, and there’s not an Apache in sight, but scene after scene in ZULU plays as if the filmmakers had watched FORT APACHE, SHE WORE A YELLOW RIBBON, and RIO GRANDE a dozen times each before making ZULU. Take the opening scene, as the camera pans over a destroyed British regiment, then the victorious Zulu warriors come into the shot and one of them picks up a fallen rifle and thrusts it exultantly into the air over his head. That really plays like a John Ford scene to me. There are even several of Ford’s signature low-angle shots later in the film.

For those few of you who haven’t seen it, ZULU is the story of less than two hundred British soldiers trying to defend an isolated mission in Africa against four thousand Zulu warriors in 1879. I guess that makes it an Alamo movie, too, in the same way that David Gemmell’s LEGEND is an Alamo novel. The first half of the movie, before the attack begins, is really slow. It didn’t help matters for me that I had trouble telling the various soldiers apart, and the DVD didn’t have captions on it, so I understood only about half the dialogue. (Worst case scenario for a deaf old geezer like me: British accents and no captions.) The second half is full of action, though, and it’s well-staged. Given the movie’s age, all the fighting is pretty bloodless despite the rampant death and destruction, which seems a little odd after seeing so many war movies with such graphic gore, but I can’t say that the lack of blood splattering everywhere really bothered me. At least there was none of that blasted close-up, quick-cut editing.

Stanley Baker plays the engineer who winds up in command of the defenders, an impossibly young Michael Caine is his second-in-command, and Jack Hawkins is a Swedish missionary. All of them do good jobs. The photography and the scenery are spectacular. Going back to my John Ford comparison, that part of Africa really does look like the American West. Overall, ZULU is okay, a war movie that just tells a story without any heavy-handed messages. That makes it worth watching in my book.

Posted by James Reasoner at 4:59 PM

Hey, I saw this recently too, and thought it was pretty cool. Now I know why.

I remember seeing this in the theater in 1965. Caine's breakthrough role. Sad that Stanley Baker died relatively young. He could play bad guys and tough good-guys equally well.

Ah, the problem is that the British accent is Welsh - hence Ivor Emmanuel singing 'Men Of Harlech'. Henry Hook though came from Gloucester, England.
It is also a film with some fine quotes.
"Why us?"
"Because we're here, lad. Nobody else."
It was Michael Caine's first starring role.
'Zulu' is a classic whereas the prequal 'Zulu Dawn' isn't though that tells the story of Isandalwana - where all the dead bodies at the beginning of Zulu are.
A third movie was planned but never happened.

George Macdonald Fraser's HOLLYWOOD HISTORY OF THE WORLD has an interesting take on the film, about how accurate it was (or was not.)

I think Jack was a little hard on ZULU DAWN. A much different movie, but a pretty interesting one.

Saw this in the theater when it came out. Loved it. I have a friend who watches it at least once a year.

And the score from John Barry is haunting.

A must watch movie.... its very interesting....

Pericles - I have 'Zulu Dawn'. The problem is that the opening half is reminscent of 'The Charge Of The Light Brigade' - with Lord Chelmsford taking over from Cardigan and Raglan.
In 'Zulu' you get interested in the 'ordinary' soldiers like Hook, Hitch and Commisary Dalton but 'Zulu Dawn' lacks those hooks.
Against that the Battle of Isandhlwana is fairly accurate.
Good book is Rorke's Drift by Michael Glover.

Jack-I found both officers and enlisted to be interesting, so I was happy.
I've read Glover's book on the Peninsular War, thought it useful. I'll definitely track down a copy of Rorke's Drift.

Both ZULU and ZULU DAWN have long been among my favorite movies. But then, I'm a big John Ford fan, so now that you mention it, it all makes sense.

As for Chelmsford being a clone of Cardigan and Raglan, well, as Fraser showed us in the Flashman books, the British officer class in the 1800s were all a bunch of bloody idiots. But Chelmsford didn't have a sweater named after him, so there's at least a little difference.

I cannot find words to fully express how perfectly formed this film is, though I will- of course- make a good stab at it! Caine was just splendid, it is still one of his finest hours in film.

I've seen this a million times and never made the John Ford connection - but you know I think you are correct. Maybe the fact that it plays like a western makes it such a favourite of mine and of course Stanley Baker is a fellow Welshman. His beloved Ferndale is only six miles from me.

I served in HMS ZULU in the Royal Navy and this film was continually shown in the messdecks. We also visited Zululand. Two good books are 'The Washing of the Spears' by Donald R Morris and 'Zulu - with some guts behind it' by Sheldon Hall, the latter being everything you wanted to know about the film, from inception to its legendary status today. Highly recommended. See my blog for full review...