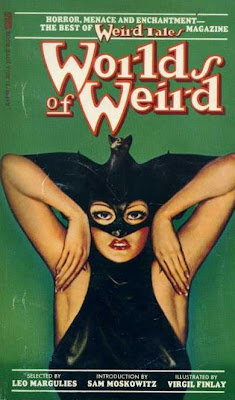 Normally, this collection would be a good candidate for a Forgotten Book anyway: a paperback original published in the Seventies, reprinting some great stories from the pulp WEIRD TALES, with a great cover, to boot. But it’s especially appropriate to remember this book at this time of year. Some of you already know why. For the rest of you, I’ll get to it in a minute.

But first, here’s the line-up of stories: “The Valley of the Worm” by Robert E. Howard (one of REH’s best yarns), “The Sapphire Goddess” by Nictzin Dyalhis (an obscure but often excellent author of fantasy, who published only a few stories), “He That Hath Wings” by Edmond Hamilton (a fine story by an author who is still underrated), “Mother of Toads” by Clark Ashton Smith (I’m not a huge CAS fan, but this story is enjoyably creepy), “The Thing in the Cellar” by David H. Keller M.D. (already an old-timer when WEIRD TALES was new), and “Giants in the Sky” by Frank Belknap Long (who had a long, productive career as author and editor for not only the pulps but also the digest fiction magazines). Pretty good stuff all around.

But there’s one other story in WORLDS OF WEIRD, and it’s the reason this is a good time of year to be talking about this book. It’s simply titled “Roads”, and the author is Seabury Quinn, best known for his long-running series in WT about occult investigator Jules de Grandin. “Roads” is a non-series story, and it’s also a Christmas story. You might not think so when you start reading it, but as you go along, you’ll be thinking to yourself, “Wait a minute . . . could this be . . . nah, surely not . . . yeah, it is!” I think it’s the best thing Quinn ever wrote, and it’s one of my favorite Christmas stories as well. If you don’t have a copy of WORLDS OF WEIRD, it’s probably too late to hunt one up and read “Roads” before Christmas this year, but if you have the book sitting on your shelves and have never read it, now’s the time to go dig it out. And read the other stories, while you’re at it. It’s a great book, any time of year.

Posted by James Reasoner at 9:22 AM

This looks like weird and wonderful. Thanks, James. Have a happy holiday and I'll see you on the 2nd if you have time.

"Roads!" Yeah, nuff said. I have this collection. It's a goody.

Roads - never read it. what am I missing?

It's hard to say too much about the plot of "Roads" without giving away too much. Let's just say it's the rather unexpected origin of a particular Christmas legend.

A most apt reminder, James. You mention the cover. I think I must have an earlier edition, which has a different and I think even better cover by Virgil Finlay. I've also been told the book was ghost-edited (now there's a thought!) by Sam Moskowitz.

You're right, Keith, there's an earlier version of this book from the Sixties, now that I think about it. I see copies of it every now and then. Moskowitz was definitely involved with it, although I don't know to what extent.

i googled 'roads' and google books has about 20 pages available online from the novel 'roads'.

i dont know if the story in 'weird' is long and this 'novel' is in fact the exact same, but for anyone interested in reading the beginning, i enjoyed it.

Indeed, this Jove paperback edition followed their reprints of the Pyramid (HBJ bought up Pyramid in the late '70s) anthologies THE UNKNOWN, THE UNKNOWN 5 (D. R. Bensen's well-remembered anthologies from the S&S magazine, the latter publishing an Asimov fantasy that had been in UNKNOWN's inventory at time of folding), and WEIRD TALES (another slim collection attributed to Margulies and probably ghost-edided by Moskowitz). That last has the worst Fritz Leiber story I've yet read in it, and I think I bought this one but didn't get around to reading it before it went on the shelf and eventually into storage...Barnes & Noble or somesuch instant remainder publisher has a volume out with the same Brundage cover...It's always struck me as a bit awkward as a pose, but a much better cover than Jove slapped on the two UNKNOWN reprints.

I might just get this one out eventually...thanks for the reminder.