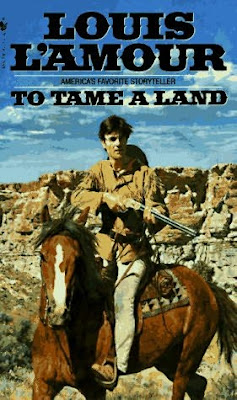 I suppose it’s hard to consider any Louis L’Amour novel to be truly forgotten, since they’ve all been in print for decades, some for more than fifty years, including this one originally published in 1955. But of all the L’Amour novels I’ve read (about two-thirds of them), TO TAME A LAND is my favorite, and it’s also one that nobody talks about much.

This novel is an expansion of the novelette “We Shaped This Land With Our Guns”, which appeared in the April 1951 issue of the pulp TEXAS RANGERS. Its narrator is a likable young man named Rye Tyler, who, in the course of the novel, takes part in virtually every sort of Western plot that’s ever been invented. He’s a pioneer, along with the rest of his family. He fights Indians. He scouts for the army. He drives cattle, saves the ranch from rustlers, becomes a reluctant outlaw himself, reforms, becomes a lawman . . . You get the idea. If it’s a standard Western plot, it’s in TO TAME A LAND. That’s why I sometimes tell people that it’s the best example of a “kitchen sink” Western ever written.

Yet in L’Amour’s hands, what could have been nothing more than a gimmick novel becomes something else: a tautly written epic that rings true from start to finish. Knowing some of the history of the West, it’s not all that far-fetched that Rye Tyler could reinvent himself time after time. Plenty of people involved in the settling of the West did just that. TO TAME A LAND is also important because it’s a precursor to L’Amour’s lengthy Sackett saga, only instead of spreading out the action through an extended family, it’s all embodied in Rye Tyler. This book also contains some of L’Amour’s best writing. The final showdown between Rye and his mentor/nemesis (a theme that shows up again and again in L’Amour’s work) is a wonderful scene.

I’m not as big a fan of L’Amour’s books as many Western readers are, but when he was at the top of his game he was very, very good indeed, and he wrote several novels that I consider classics. I’d also put FLINT and THE DAYBREAKERS (the first Sackett novel) in that category. But TO TAME A LAND is the best of them all, as far as I’m concerned. I don’t have a copy of it to give away, but it shouldn’t be hard to find if you're interested in reading it.

Great review! I might read this one first, once I make it through the short stories--a lengthy task, that.

I agree - how can an author like Louis L'Amour have a forgotten book? But with his output I suppose it is quite easy for some titles to be overlooked. Everybody knows the Sacketts and, probably, those books that have been filmed like 'Hondo' and 'A Man Called Noon'. But there are those who don't know that there is more than one book featuring Kilkenny or that the Talons were relatives of the Sacketts.
Thanks for the reminder, James.

Thanks James - I've read a lot of Lamour but not this one. I'll check it out as my local Borders has a good selection.

Like you, I've read about two thirds of L'Amour's novels(I used to carry a list of titles I needed for looking in used book stores. long gone and I'd have to go through them all, a daunting task as they're currently packed away). I'm sure this one is one of the not reads. I will scout the used book sites and see what I can find.
Thanks!

"In L’Amour’s hands" makes all the difference. I recently finished FLINT and though the plot was standard, the prose elevated it to exceptional storytelling. I am sure I will read TO TAME A LAND before long. BTW Eugene Cunningham's BORDER GUNS was well worth the wait. Next up is TEXAS SHERIFF.

I agree absolutely. This is L'Amour's best. My favorite among his books, and one that I've reread at least four times.

Have to say "ditto" to a lot here. Not really forgotten. A favorite among the works of a writer who continues to draw more attention than many of his peers, who have been undeservedly forgotten.

I consider it one of, if not the best western written in the first-person, and yes, it covers a lot of major themes all in the space of a brisk 150-odd pages -- which I think remains the best length for this kind of fiction. (I know Lonesome Dove won a Pullitzer, but I figure McMurtry books are usually several books skilfully joined together!)

A rarity, a treasure and an oddity in my collection of westerns is a 1958 edition of To Tame a Land "told in pictures". This early version of a graphic novel was published in London by the Amalgamated Press, Fleetway House. The artist is uncredited -- someone like Steve Holland could no doubt give us a name -- and might have been Spanish. L'Amour's story is broken down, comic-book style, into about 130 frames over 64 pages and retitled Gunman "Adapted by Barry Ford [Joan Whitford] from the novel 'To Tame a Land' by Louis L'Amour".

Any other info about this book would be appreciated.

I've never read this one, but now I'll check it out. My dad has almost every L'Amour book here in their house, so I can find it. I've always been partial to HONDO, but that was my first L'Amour so it made an impression.

I owe a lot to this book. This was the first book that I bought for myself with my own money when I was a kid. I got it at the one grocery store we had in town. This book started my love of reading and collecting books. I still have the paperback that I bought all those years ago, but I also bought the hardback when it was published a couple of years ago because I like it so much.

Thank you for this recommendation.

The artist for Gunman was Robert Forrest whose style was better suited to brooding historical work like "The Picture of Dorian Gray" or "The Mystery of the Red Barn". But he illustrated quite a few westerns, mostly Kit Carson yarns for the Cowboy Picture Library.

Thanks for the info, Steve. That "brooding" is a good word, and I think in many respects it made the artist a good choice for this particular western, especially when you get to the showdown: "Ryan felt a little sick inside as he gazed at the man who had been his hero. There was nothing left of the kindly Logan Pollard in the icy, dangerous outlaw covering him with his six-gun."

In the "real" book, incidentally, more attention is played to the role of Liza: "And here before me in this tight, icy man with the thin-drawn mouth was what I might become. This man who killed wantonly now, who could take a decent girl and hold her until she was finally broken by his will."

First off let me say "yes, I do realize that this blog post is almost 6 years old." I found it on Google and now have the blog bookmarked.

I had read all of L'Amours books by the time I hit 16. I still remember the day he died. I was 15 years old and his death was announced on the radio as my uncle drove us past the airport. I was devastated. Even though I had never met the man I felt like I had lost a long time friend or father figure. I have since reread almost all of them several times over. Only Jubal Sackett and The Haunted Mesa top To Tame a Land on my all time favorites written by Lois L'Amour.

my absolute favorite l'amour book!probably my first western,after all these years i cant forget ryan tyler and logan pollard the plutarch reading gunfighters!