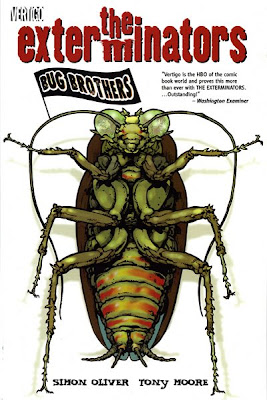 This is a far cry from my usual comics reading, which tends toward the traditional (Superman, Batman, other super-heroes, Westerns, war comics, etc.). THE EXTERMINATORS: BUG BROTHERS reprints the first five issues of a relatively new series from Vertigo/DC and centers around the largely dysfunctional lives of the men and women who work for a pest control company in Los Angeles. The narrator is Henry, a recently paroled ex-con whose stepfather owns the company. Unless I missed it, I don’t think the story ever mentions why Henry went to prison, but in this first volume, at least, it doesn’t really matter. He’s an intelligent, flawed, but ultimately likable protagonist. As the story begins, he’s partnered with an exterminator named A.J., who’s just as despicable and repulsive as the vermin they go after. Along the way Henry is also teamed at various times with Stretch, a black Buddhist cowboy, and Kevin, a fundamentalist Christian. There’s also Henry’s girlfriend Laura, who works for the company that makes the poison the exterminators use on roaches.

This is more than just a bizarre soap opera, though. It’s also a bizarre scientific/conspiracy thriller, because the vermin encountered by the exterminators are getting steadily larger, more aggressive, and even intelligent, especially the cockroaches. Could the new poison they’re using have some connection? Well, of course it does. Does the evil corporation have some hidden agenda, possibly connected with the government? You know the answer to that as well as I do. But despite those areas of predictability, the script by Simon Oliver (a newcomer to comics; I think this series was his first published work) is funny and well-paced, and he’s created some interesting characters. I like the art by Tony Moore, too, which is easy to follow and suitably grotesque when it needs to be. Overall, I enjoyed THE EXTERMINATORS quite a bit, and I’d certainly read more in the series.
Posted by James Reasoner at 9:28 PM