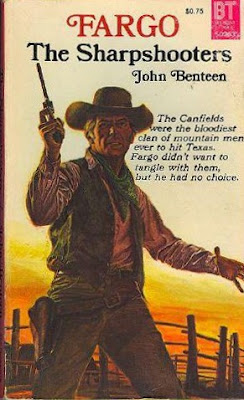 THE SHARPSHOOTERS is #9 in the Fargo series by John Benteen, who was really Ben Haas, and while it happens to be the one I’ve read most recently I’m really recommending the entire series. Although they were marketed as Westerns, and some of them certainly have Western elements, like this one, they’re actually tough, gritty, globe-trotting adventure novels set around 1915, in locations ranging from the Philippines to Panama to Alaska.

Neal Fargo is a veteran of the Spanish-American War who served in Teddy Roosevelt’s Rough Riders. In fact, he carries a sawed-off shotgun presented to him by Roosevelt himself. He’s a mercenary, a gun-runner, and has fought in wars all over the world. He’s not exactly a hired killer, although he’s definitely a bad man to have for an enemy. In this book he’s caught by the Texas Rangers trying to run ammunition across the Rio Grande to Pancho Villa and blackmailed into penetrating a remote valley in the Davis Mountains of West Texas to arrest a man who shot a Ranger in the back. Problem is, the killer is part of a clan of hillbilly moonshiners who came to Texas to escape a long, bloody feud back in the Smoky Mountains. Complicating the situation are two cattle barons who want the valley for themselves and have hired gunmen to take it away from the moonshiners. In other words, Fargo finds himself surrounded by scores of hardcases who want to kill him.

As I read other books in the Fargo series, I was reminded of Robert E. Howard’s Conan, and the similarities really come through in this book. While I don’t know if the author, Ben Haas, ever read REH, my hunch is that he did. Haas even wrote three sword-and-sorcery novels, EXILE’S QUEST and THE NIGHT OF MORNING STAR as by Richard Meade and QUEST OF THE DARK LADY as by Quinn Reade. I’ve read the latter and liked it, haven’t gotten to the two Meade books yet but I will.

Haas is actually one of my favorite Western writers, though, and I highly recommend his work. He wrote the Fargo series and the even longer-running Sundance series as by John Benteen. As Richard Meade he wrote the above-mentioned sword-and-sorcery novels and a handful of really fine traditional Westerns, as well as a couple of espionage novels I haven’t read. As Thorne Douglas he wrote the five-book Rancho Diablo series, another one I haven’t gotten to yet. And he wrote several mainstream and historical novels under his own name. First and foremost, though, he was a great paperbacker, turning out numerous tough, pulpish Western action novels under the John Benteen pseudonym. A couple of the Fargo novels were written by someone using the name John W. Hardin, and the Sundance series was eventually taken over by Peter McCurtin after a few books written by various authors (Tom Curry, Dudley Dean, and Mike Linaker, that I know of) under the Jack Slade house-name. But if a book has John Benteen’s name on it, chances are that Ben Haas really wrote it and that it’s very entertaining. Haas died relatively young, but he wrote a lot of good books in a fairly short career. Take a look and see what you think.
Posted by James Reasoner at 8:24 AM

I was a big fan of the Benteen books all those years ago. I think I read them all and continued the Sundance series after McCurtin took over.
I don't have many of them left anymore though, for various reasons.
The Lassiter books under the Jack Slade name were another favorite.
This post carries me back many years to that lost youth.

I recall the Lassiter titles and I think it was the 1970s. I might be wrong on that date.

I only have "Shotgun Man" in this series and haven't read it. I'll move it up on my list. I don't see these around too often at used book sales.

Oh, and I've actually read "Quest of the Dark Lady" and "Exile's Quest." Both were good. I thought the Reade book was best. I'm surprised I never noticed the "reade" "meade" thing. I have the other Meade book but haven't read it yet.

James, you've got my backing on Fargo. One of my favorite series in any genre.

I also have The Lost Fraulein and The Danube Runs Red, the Meade espionage books. And didn't he do Rough Night in Jericho? One of my favorite Dean Martin westerns.

I like the Lassiter series, too, although it's more inconsistent than Fargo and Sundance. Ben Haas wrote at least one Lassiter novel, A HELL OF A WAY TO DIE, and may have done others. The first four were by W.T. Ballard.

And Haas did indeed write the novelization of ROUGH NIGHT IN JERICHO, Bob.

I have read a lot of Fargo and Sundance. Fargo was unique, even if I wonder if he was inspired by the movie "The Professionals" ;-)

But Fargo is a series which is difficult to collect. In terms of numbering or copyright notices the early novels are a fine example of a pubisher, which hadn´t any concept of marketing or just didn´t care.

Here in Germany they did Fargo and Sundance as series of paperback originals. But the noves were edited for violence, and of course the non-western books - which are often much more interesting imho :-) - were not translated. The publisher even bought the rights for continuing the series, but after two books written by german writers the series was cancelled after two years and a bi-monthly schedule at the end. It can´t have been a rousing success, on the other hand the publisher was going through problems at the time and cancelled most of its western-line.

I never knew Haas wrote Fantasy and Crime. Thanks for the tip.

"But Fargo is a series which is difficult to collect. In terms of numbering or copyright notices the early novels are a fine example of a pubisher, which hadn´t any concept of marketing or just didn´t care."

All too true. The publisher would change the numbers on the books when they reissued them, the copyright notices didn't seem to match up all the time, and trying to figure out the real order of the series was a challenge. The same thing happened on the Lassiter books, although maybe not to the same extent. In dealing with bibliographic issues where Belmont/Tower/Leisure is concerned, sometimes all you can do is make a best guess.

Which reminds me that I once named an apartment complex in a Mike Shayne story the Belmont Towers, but nobody seemed to notice. Too obscure, I guess.

Earlier this year I read the stand alone John Benteen novel The Trail Ends at Hell. I thought the book was very good, and a great title to go with it. I think I have all of the Benteen Sundance books and Fargo books, I just need to find the time to read more of them.

I agree, THE TRAIL ENDS AT HELL is a good one. If you like it you'll like his stand-alone traditional Westerns as Richard Meade, too. I think GAYLORD'S BADGE is probably my favorite of those.

I have Gaylord's Badge along with two other Richard Meade westerns. I will get to them one day.

I too have all the Sundance books, all but two of the Fargo books, one of the two Cutler books as by Benteen (where these by Haas?), and I have all but four of the Lassiter series.

I've not read many of any of them, have only read one Fargo story. Have been trying to work the real Lassiter order out but not having them all this has proved difficult.

Both the Sundance and Lassiter series have a book published twice with different titles, did this happen with the Fargo series too?

I'm not aware of any of the Fargo books being duplicated with different titles, but I haven't read them all. It wouldn't surprise me, though.

There was a time when I read everything that was vaguely swords and sorcery. I know I read the Meade and Reade books you mentioned. It comes as a complete surpise that they were written by the same guy. As I recall I sort of liked them.

As a series, I lost interest in Fargo after about 3 books. The setting moves around from place to place, but the story is always just the same. Is there any of the books where Fargo does not kill the big boss in a desperate, hand to hand battle, and get the girl?

But also I remember another book by John Benteen. Was this a series, or a standalone? The main character was a professional trapper moving aroung the west. I can't remember the name of the character, or the hero. Can anyone help me with this?

I guess I've read the Fargo books with enough time between them that I didn't notice the similarities that much. But to a certain extent, that comes with the territory in series fiction in all genres.

The other series you mention sounds like Cutler, which ran for only two books. Cutler is a professional trapper looking for the bear that killed his wife. I've read the first book, and thanks to the generosity of a good friend I plan to read the second one soon.

You are right. The book is: Wolfpack, Cutler #1.
(When in doubt, do to EBay and type in th author's name.)

I am a huge fan of the Sundance Series, but never knew of these other pseudonyms he worte under (didn't even know Benteen was a pseudonym to be honest). I got the first one from my uncle when I was about 12 (Bring Me His Scalp) and was hooked. Thanks for the additional background and info-I'll be looking for more of his books.