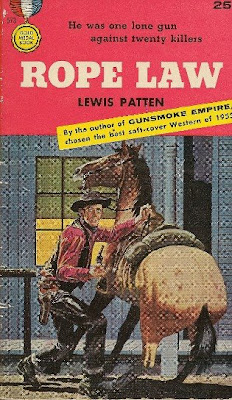 Over the past few years, Lewis B. Patten has become one of my favorite Western authors. The West he writes about is often a dark and dangerous place, where no one can be trusted completely, not even your best friend or the woman you love, where good men sometimes do bad things and bad men do even worse. His Gold Medal novel ROPE LAW, originally published in 1956, fits right in with that description and is probably the best Patten novel I’ve read so far.

The story begins in the middle of the action, with a posse chasing down a fugitive atop a rugged plateau. When the man they’re after holes up in an old cabin, the posse members surround the place, but then the sheriff throws them a curve by riding up to the cabin and walking in to confront the outlaw . . . who, as it turns out, is the lawman’s adopted son.

From there, as the posse waits for nightfall so they can close in, Patten backtracks to fill in the story of what brought the characters to this point, and it’s a years-long saga of drunkenness, prostitution, robbery, and murder worthy of any of the more contemporary Gold Medals. Sex serves as the motivation for most of this, and while the scenes aren’t graphic, there are quite a few of them for a traditional Western published in 1956. He also puts his heroes through a lot of torment, both emotional and physical, that was unusual for the time period. Patten’s tendency to come up with somewhat happy endings keeps his books from falling completely into the Western noir category, but they come close enough to satisfy most readers of crime fiction, I think. ROPE LAW certainly does.

A couple of words of warning, though: Not all of Patten’s novels are as dark as what I’ve described here. Some of them are very traditional Westerns with nothing really to distinguish them except a competent readability (not something to be taken lightly in its own right, mind you). And he’s also an inconsistent writer, especially in his later books which are carelessly written to the point that I’ve started some of them and not finished them. But pick up ROPE LAW or LYNCHING AT BROKEN BUTTE or THE SCAFFOLD AT HANGMAN’S CREEK (Patten likes hangings as plot instigators, too) or any number of other novels, and I think you’ll be thoroughly entertained.

Email ThisBlogThis!Share to TwitterShare to FacebookShare to Pinterest
Labels: Lewis B. Patten, Westerns

I've enjoyed quite a few of Patten's books. I picked up a few westerns yesterday. I saw a handful of Benteen's Sundance stuff but it didn't look that great.

Patten is one of my favorites, too, and copies of his books are not as hard to find as some of the other western writers of the '50s and '60s.

Many were reissued as Leisure doubles in the '90s. Others appeared in Britain and the Commonwealth countries as Black Horse Westerns, the last, I think, in 1996. (It was an honor to see my own early hardcover westerns alongside them in the same format.)

I agree with your assessment of Patten's work, James. Lynchings, sex crimes and guilty towns feature frequently, and there is a definite noir-ish quality to all this, which some of us still try to inject into BHWs today. As for "somewhat happy endings", maybe they are there, and the sex scenes toned down, then and now, at the behest of the publishers?

Mr. Patten looks like a good read. I'll look for his stuff at our used bookstores. Thanks for the recommendation.

I don't like the Sundance books as much as the Fargos, but I've enjoyed the ones I've read. I've got another one coming up soon in my reading.

I think it was just the climate of the times that led Patten to come up with happy endings for his books, but there could have been some editorial influence there, too.

As Keith mentioned, Patten novels are easy to find. The local Half Price Books has multiple titles all the time, and all the libraries around here still have quite a few of his books, too.

Don't sell the Sundance books short.
Bring Me His Scalp is as good as any Fargo I've read. It opens with a 30 page tour de force action scene in which seven men pursue the hero into a desert waste and he takes them down, believably, one at a time.
Robert E. Howard would have respected that scene.

Right, I just checked out local library's catalog, and they list
9 titles (including large print which is probably a good thing for my eyes). One write up says he won three Spurs Awards. Some good summer reads I look forward to. Thanks, again.

The older I get, the more I like large print books. I've gotten to the point that I won't read some paperbacks just because the print is too small.

James, have you read Benteen's two Cutler books. They just arrived in the mail today and I was wondering. I don't know a lot about them.

I've read the first Cutler book and remember it being very good. Pretty dark stuff. I never had the second one.

My copy of Rope Law just arrived in the mail. I'm looking forward to reading it, a nice hardcover with big print.