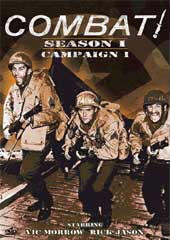 I've been hunkered down writing lately, which explains why this blog has been quiet. I've managed to watch the first four episodes of COMBAT! on DVD, though.

COMBAT! was one of my favorite TV shows as a kid. I watched it nearly every week during its original run in the Sixties. Then during the Eighties I saw some of the episodes again in syndicated reruns and still enjoyed them. Now, I'm glad to report that the series still holds up pretty well. The production values are high, the black-and-white photography is really good, and the acting, writing, and direction are all top-notch. Vic Morrow, who usually played villains (and was good at it, too), is excellent here as the stalwart Sergeant Chip Saunders. Rick Jason as Lieutenant Hanley is kind of a stiff (Jason was intended to be the star of the series, but Morrow eclipsed him within a few episodes), but I don't mind him too much. The supporting cast, playing the GIs in Saunders's squad, are all great, although the best of the bunch, Jack Hogan as Kirby and Dick Peabody as Littlejohn, are barely visible in the early episodes I just watched.

In fact, that's the problem with the early episodes, many of which were directed by Robert Altman. They tend to concentrate on one or two characters, and I enjoy the later episodes more because they're more of an ensemble effort. I really like the interaction of the various squad members. But some of the early ones are still really good, like the second episode, "Any Second Now", which was directed by Altman and features Hanley trapped in a French church with an unexploded German bomb and a shaky British bomb disposal officer who's losing his nerve. This is a fine episode. I hadn't seen it since it was first broadcast in 1963, but I still remembered it after nearly 43 years.

I don't know when or if I'll get around to watching any more of these, but I'm glad to know that a show I liked a lot back then was actually pretty good. (That hasn't been the case with all of my old favorites.)
Posted by James Reasoner at 11:17 PM

I remember Combat fondly, myself. I remember playing combat on the farm and most of the time I was Littlejohn with his big BAR. At least I remember him as carrying a Browning Automatic Rifle. I hadn't thought of that in years.

True story. When I was 18 I was home watching Combat one night when a friend who'd gone off to join the Air Force came to the door. He told me the AF rejected him so he planned to join the Army. "Want to go along?" he offered. Full of the excitement of Combat I immediately said yes. A week later we visited the recruiter. Ten months later I was in Nam.