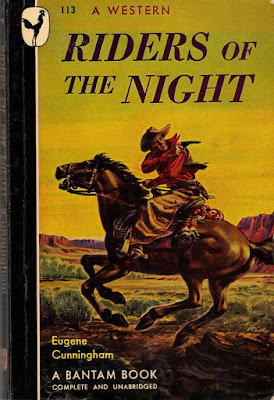 RIDERS OF THE NIGHT, from 1932, was Eugene Cunningham's second published novel, although some of the ones that came out later actually predate it since they were fix-ups of linked novellas originally appearing in various pulps. As far as I can tell, RIDERS OF THE NIGHT was written as a novel. It's the story of young Burk Yates, who returns from college in the East to the Texas ranch where he grew up. The ranch was started by Burk's father and his partner Duke Yarborough, both of whom are now dead. Ownership of the ranch is shared between Burk and Yarborough's beautiful daughter Myra, who has fallen for neighboring rancher Lance Gregg. A bunch of outlaws known as the One Gang has been rustling stock from the ranch as well as holding up stagecoaches and trains and generally raising hell throughout the area. In fact, the novel opens with a very sinister and atmospheric scene in which the gang lynches two men, leaving them dangling from a corral gate.

Anyone who's read or watched very many Westerns will have a pretty good idea of everything that's going to happen in this novel, although the final showdown between Burk Yates and the "mysterious" mastermind behind the One Gang plays out differently than I expected. The predictability of the plot does hurt RIDERS OF THE NIGHT a little, but it's still worth reading because of Cunningham's distinctive hardboiled style, the great action scenes, the introduction of Mexican/Navajo gunfighter Chihuahua Joe, a recurring character in Cunningham's work who serves as sidekick to a number of different heroes, and a raft of other colorful characters including, yes, a saloon girl with a heart of gold. I had a fine time reading it.

By the way, someone has tallied the number of killings in this book and come up with 75. I've read that in some of Cunningham's novels there are as many as 300 deaths. His reputation as one of the most violent of the early Western authors appears to be well-deserved. 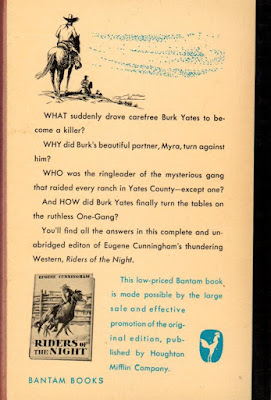 Thanks for the review, James. You had me at Chihuahua Joe. I've ordered a copy. Sounds like a classic.

I've always had a problem with the excessive number of shootings in the stories of Eugene Cunningham, so I was interested in your comments about there being 75, etc. I looked up his entry in TWENTIETH CENTURY WESTERN WRITERS(1982-James Vinson editor), and I was amused to read the following:

"Complaints have been voiced the the body counts in his fiction rival those allegedly scored against the North Vietnamese by the United States. Another complaint voiced by tenderhearted moderns is simply that his heroes and villains alike hold human life pretty cheap."

I'm convinced that JOHN WICK is a descendant of Eugene Cunningham. Both men deal in large body counts.

Just checked Amazon to see if it was available for Kindle, but not listed there for print either. Did see some of his other books such as WHISTLING LEAD (I can see the body count already with that title) and QUICK TRIGGERS to name a couple, but none of them available for digital release. Do you know of any of these would be re-released in whatever format, James?

Paul,
There are Kindle editions of Cunningham's two non-fiction books, GYPSYING THROUGH CENTRAL AMERICA and TRIGGERNOMETRY (a great volume about gunfighters), plus a pulp story in one of Wildside Press's Megapack collections, but that seems to be it for e-books. Quite a few of his books were published in large print hardback editions in the past 15 or 20 years and used copies are pretty inexpensive on Amazon. Golden West Literary Agency, the late Jon Tuska's outfit, controls the rights to Cunningham's work, and they haven't been very good about getting e-book editions out there with the exception of the books that were sold to Leisure.

Walker and George,
There's a lot of violence in Cunningham's work, to be sure, but it's not real graphic. If anything, his hardboiled style is kind of understated most of the time.

Thanks for the recommendation James. You have never let me down yet. If anyone yes looking for this novel, I found it on Abebooks.com.

Phillip,
I appreciate the kind words. I think I have all of Cunningham's novels except for a couple, and I plan to hunt them down, too. I won't ever have all his pulp work, but that's all right. There's plenty to read.

A pulp collecting friend of mine who I've now known for more than 40 years, hates westerns and won't read them except for three exceptions: Max Brand, J.E. Grinstead, and Eugene Cunningham. Many times I've told him that there are other writers of westerns just as good as Grinstead and Cunningham but he won't try anyone else.'

It's comical to see him carefully hunting through the contents pages of hundreds of western pulps, only looking for these three authors and completely ignoring the excellent work by other authors.

James, you keep on adding to my reading list. Have seen Cunningham's name but would have never thought to pick him up absent this post. I ordered this and another.