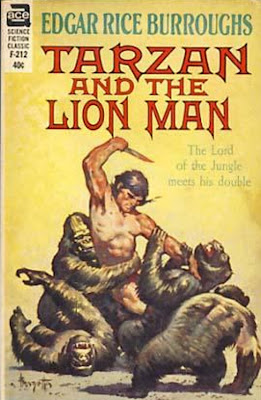 As with so many of these books, I can tell you where and at least roughly when I bought my original copy of this novel. I picked it up used at Thompson’s Bookstore in downtown Fort Worth during one of those long-ago, seemingly-endless-at-the-time junior high summers I spent watching old movies on TV, playing sandlot baseball, kissing a girl who was spending the summer with her cousin who lived down the street from me (I wish I could remember her name!), and reading mass quantities of comic books, digest magazines, and paperbacks. I probably read most of it on my parents’ front porch stretched out on one of those folding lounge chairs made from interwoven strips of green and white plastic that left a crosshatch pattern on any bare skin that came in contact with them for very long.


But what about the book, you say, or am I going to spend this entire post waxing nostalgic? Well, I can tell you that I remembered it as one of my favorites from the Tarzan series and one of my favorite Burroughs novels, period, because it was so goofy and over-the-top. When I recently came across a copy of that same Ace edition with the Frazetta cover, I decided it was time to reread it and see how it holds up after all those years.


I’m happy to report that I enjoyed it just as much, if not more, this time around. It’s certainly the funniest Burroughs novel I’ve ever read.


Tarzan himself barely appears in the first half of this book. It’s the story of a group of filmmakers who go to Africa to make a picture about a “lion man”, a boy who is raised by lions and becomes, well, the king of the jungle. This allows Burroughs to make considerable fun of Hollywood, including the casting of a novice actor and champion marathon runner as the Tarzan-like Lion Man. Any resemblance to champion swimmer Johnny Weissmuller I’m sure was completely intended. By this time in his career, Burroughs had already gone through the experience of producing his own Tarzan movie, the serial THE NEW ADVENTURES OF TARZAN, starring Herman Brix (later known as Bruce Bennett), so he’s able to paint a satirical picture of Hollywood executives, directors, and writers, along with the other members of a motion picture company on location.


Not surprisingly, the movie safari runs into a lot of trouble. They’re attacked by hostile natives, betrayed by some of their own, and split up to endure some assorted adventures, as Burroughs employs his usual technique of cutting back and forth between parallel storylines. So far, so good, although other than the humor there’s really not much to distinguish TARZAN AND THE LION MAN from most of the other books in the generally lackluster second half of the Tarzan series.


But then, halfway through, Burroughs comes up with a twist so bizarre that I remembered it vividly more than four decades later, and that plot element, which I can’t even describe without ruining it for any potential readers, dominates the rest of the book. Reading it now, it made slightly more sense to me than it did the first time around, but it still requires a considerable suspension of disbelief. Burroughs makes it work, though, and he’s not content to leave things that way, either, but instead piles on more and more goofiness, throwing in plot twists almost all the way to the end.


And what an ending. The final chapter serves as an epilogue to the book and is one of the best things Burroughs ever wrote. Which is why I issue this warning: if you happen to read the Ace edition of this book, don’t read the foreword by Camille Cazedessus, Jr., which gives away ’way too much of what happens, especially in the end.


I’ll be honest with you. You might find this book stupid, silly, and ridiculous and think that I’m crazy for recommending it. What can I say? It worked for me, otherwise I wouldn’t have remembered it so well and enjoyed it so much 45 years later. It’s really not representative of the Tarzan series, other than TARZAN AND THE FOREIGN LEGION, which has some of the same sort of humor although it’s played much more straight for the most part. But if you want to read a book that’s almost a MAD Magazine version of Tarzan, written by the character’s creator himself, look no further than TARZAN AND THE LION MAN.
Posted by James Reasoner at 6:00 AM

A couple weeks ago we packed my set of Tarzan paperbacks, this one included, and I thought at that time of taking one or two out to read, but decided to keep them together in this somewhat chaotic time. Now I'm really tempted, as soon as they again see daylight, to read one, probably somewhere around the 4th or 5th, or? Do you have a stand-out favorite of the series?

I like when you wax nostalgic, especially about books.

It's been quite a while since I reread any of the Tarzan books except this one, but I recall particularly liking TARZAN AND THE JEWELS OF OPAR, TARZAN THE UNTAMED (fighting Germans in Africa during World War I), TARZAN THE TERRIBLE (a fairly direct sequel to UNTAMED), and TARZAN, LORD OF THE JUNGLE (a typical lost civilization yarn, but special to me because it was the first Tarzan novel I read).

I'm tempted as well to pull one out. Unlikely as it might be, I DO have one I have never read, only acquiring it a couple of years ago. The juvenile THE TARZAN TWINS.

I felt a sense of déjà vu after reading your post on ERB. I read many of his books as a teenager though I can't recall the titles now, and I don't own any. The colourful illustrations on the cover are as captivating as the stories inside. ERB still has a loyal readership in India where, funnily, many readers associate him only with Tarzan comics which were no patch on the novels.

My personal favorite in this series is TARZAN AT THE EARTH'S CORE. It's loopy, scientifically impossible, but a pure delight. I loved all of the EARTH'S CORE books.

James, I agree, LION MAN is a sadly underrated Tarzan novel, full of satire, including the SF subplot about the gorillas into whom the mad scientist has implanted DNA stolen from the remains of Henry VIII and his court. GOLDEN LION (more intelligent gorillas), ANT MEN, and LOST EMPIRE are other notable entries.

I miss seeing these old Ace editions. I should haul them out of storage.

James, the first Tarzan i read was the original TARZAN OF THE APES, so it still stands as a fave. I recall liking OPAR a lot, too, and SON OF TARZAN, and LORD OF THE JUNGLE. Lost civilization yarns offered an extra draw to my teen imagination.

I have occasionally entertained reading one again, but have resisted out of fear of the books not holding up. Your post and review is encouraging me anew.

James, I agree with you about the merits of LION MAN, so I hope you won't mind if I make a slight correction: ERB had not yet formed his own motion-picture production company when he wrote this novel. Burroughs-Tarzan Enterprises was incorporated in 1934, and principal photography for NEW ADVENTURES OF TARZAN commenced on November 28th of that year.

Burroughs, however, already had plenty of experience dealing with Hollywood people when he began writing TARZAN AND THE LION MAN. I suspect the novel's real impetus was the sudden emergence in 1931 of independent producer Sol Lesser, who had obtained previously unexercised rights to a Tarzan property licensed several years earlier. Lesser horrified and exasperated ERB by tendering a contractually specified option-renewal payment shortly before the rights expired -- and just before M-G-M began shooting the first of the Johnny Weissmuller Tarzan pictures. Burroughs could have been hit with a breach-of-contract suit by Metro because he had stipulated upon signing with them that no other producer had any claim to the character. He had forgotten about the outstanding rights he had granted two independent filmmakers who sold their interest in the property to Lesser after failing to raise sufficient financing.

After considerable wrangling, ERB persuaded Lesser to delay his Tarzan film for one year following the release of Metro's initial effort. Realizing that by doing so he would reap the benefit of M-G-M-generated publicity -- not to mention earning the good will of Burroughs -- Lesser cannily agreed. (His first Ape Man film was the 1933 serial TARZAN THE FEARLESS, starring Buster Crabbe.) ERB had run afoul of tricky Hollywood people before, and although the Lesser contretemps had a happy ending, it gave him a bad couple months and likely inspired the writing of LION MAN.

Ironically, the success of Metro's first Weissmuller film enhanced the market value of ERB's most famous character, and LION MAN was the only Tarzan novel to be serialized in a slick magazine (LIBERTY) prior to publication in hard covers.

Sorry for the lengthy post, but I hope some of your readers will find the additional info interesting.

Ed,
No apology necessary, I really appreciate the info. I was going by memory (always a dicey proposition) about the Tarzan serial with Herman Brix, and it's good to know the probable background to this novel.