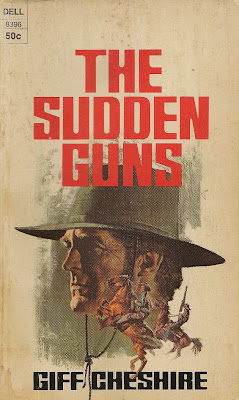 I’m always on the lookout for good, tough Western writers. Having read and enjoyed some of Giff Cheshire’s pulp stories, when I came across this novel by him I decided to give it a try. Set in Nevada, it’s a range war yarn. Wells Packwood, owner of the Clover Leaf spread, is trying to gobble up all the other ranches in the area. Pick Atherton buys the Mesa Ranch, knowing about Packwood’s plans but figuring he can hold off Packwood’s ambition. Packwood plays dirty, though, moving a family of nesters onto a spring and some range Atherton claims, then raiding the place, murdering the head of the family, and framing Atherton and his Mesa ranch hands for the crime.


If you’ve read very many Westerns, especially the ones published by Doubleday in the Fifties and Sixties, there won’t be much in the basic plot of this one that surprises you. It’s your basic “greedy rancher vs. tough hero who’s finally pushed too far” story. Cheshire does some nice things to set it apart, though. For one thing, there are three strong female characters in the book – Packwood’s wife, the wife of another rancher in the area, and the daughter of the nester who is murdered early on – and all of them have important parts to play in the plot. They’re some of the best-developed characters in the book as well, and I was surprised by how some of their plotlines played out. Cheshire spends a lot of time on his villains, too.


Which brings up the only real flaw in THE SUDDEN GUNS. For a guy who’s supposed to be the hero, Pick Atherton really isn’t “on-screen” much in the book and doesn’t have a lot to do except in the big showdown at the end (which is a good one). He remains something of a cipher as well, as the reader never learns much about him. But the good supporting cast makes up for that to a certain extent.


Giff Cheshire had a long, productive career as a Western writer, beginning in the pulps and producing hardback novels into the Seventies. In everything I’ve read by him, he has an enjoyably hardboiled style. THE SUDDEN GUNS doesn’t break any new ground, but it’s a solidly entertaining traditional Western and is worth reading for fans of that genre.
Posted by James Reasoner at 6:00 AM

The only people with cooler names than the old western writers were the old C&W honky-tonk guys.

Do you think that there was a certain paint-by-numbers approach in Double-D westerns in the '70s, something that was encouraged, or just a matter of the old pros knowing what was Good Enough and Doubleday's editors agreeing? Was any book editor in that period pushing for more innovative work in westerns?

It's always an education to read your forgotten book posts, James, and though I admit I read/buy few of the books you feature, I certainly enjoy reading about them. Thanks as always.

This was another writer I was not familiar with. Looks like it would be fun. Thanks, James!

Todd - Pat LoBrutto at Doubleday ceretainly allowed Joe Lansdale a great deal of leeway with THE MAGIC WAGON and his two WWA anthologies. They were definitely not your paint-by-numbers stuff.

Indeed, Scott...was LoBrutto the primary Double-D editor at the time, or was he simply Lansdale's Doubleday editor? More work at novel length in the Double-D line after the fashion of the contents of RAZORED SADDLES might've busted them out of the library sales ghetto. Or not. Not that I complain when faced by the work they published by Lansdale, Lee Hoffman, and others...I have a sense the M. Evans series averaged a bit more innovative, at least for a while in the '80s.

You mention the Doubleday DD westerns. One of my great thrills was having two of my westerns (both actually Midwesterns) published under that brand. For quite awhile we lived in the boonies.The bookmobile came every Saturday to a big grocery store. I was ten-thirteen in those years. The bookmobile guy let me take adult books.They were stocked heavy with DDs as well as Doubleday sf and mystery. Being a DD writer was one of my earliest goals.

By the way-Pat Lo Brutto certainly gave me wide leeway with my books. One of them was set in the late 1880s and involved a baseball game (this part was based on fact) between Cedar Rapids and Des Moines, a bank robbery spearheaded by a Communist agitator on the run from the law in Chicago (my favorite character in the book of course) and a look at a city that had just had its first electric lights installed. Pat is a great guy and was a fine editor of the old school--i.e., a well read gentleman who cared more about the books than the book keeping.

Ed,
My introduction to a lot of adult mystery, Western, and SF writers came from the bookmobile, too. Great memories.

Todd,
I believe Pat LoBrutto was the editor of the whole Double-D line at that point. During that time period (the early 90s), Greg Tobin and Gary Goldstein at Bantam and Sara Ann Freed at M. Evans were also pushing the boundaries of the Western quite a bit, although not to the extent that LoBrutto did with Joe's books. I don't know who the Double-D editor was before that. I agree that the Double-D Westerns from the 60s and 70s have a certain sameness to them, with some leeway for more distinctive voices like that of Clifton Adams, but I suspect it came from having a consistent stable of writers who came up the same way, pulps to paperbacks to hardbacks.

The post and the comments were quite an education for me. Thanks all around.

It's criminal that Clifton Adams is forgotten. He wrote four or five of the finest westerns I've ever read.