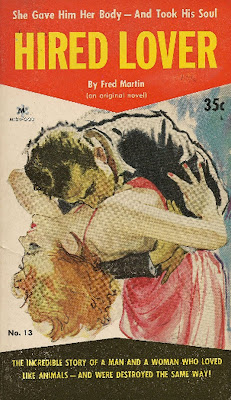 A while back, Michael Hemmingson discovered that “Fred Martin” is a previously unknown pseudonym for Orrie Hitt. HIRED LOVER is one of only two novels published under the Martin name, and after reading Michael’s review of it, I had to hunt up a copy and read it for myself. I’m glad I did.

This is one of Hitt’s James M. Cain-influenced novels, with the narrator, tough guy Mike Callahan, going to work as a driver for a rich old man who has a beautiful young wife. Well, you know what that leads to, or at least you should if you’ve read very many of these novels. Mike falls in love with his boss’s wife, and sure enough, the subject of murder comes up. Was there ever a better piece of cover copy for a noir novel than "She gave him her body -- and took his soul"? Of course, since this is an Orrie Hitt novel, there’s another woman vying for our hero’s affections, a good woman he’d be a lot better off with, if he wasn’t too dumb and horny to realize it. Hitt’s not content to have the plot unfold exactly in the way you’d expect, though. He throws in enough twists to keep the pages turning and at the same time does a masterful job of manipulating the reader’s emotions.

Hitt was really firing on all cylinders with this one. The prose is tough and spare, without the digressions and repetitions that he was sometimes prone to. HIRED LOVER is as potent a combination of crime noir and sleaze novel as I’ve run across in a long time. And while the endings in Hitt novels often come across as rather lame, not so here. The last few pages of this book really pack a punch.

This may well be the best Orrie Hitt novel I’ve read so far. If you ever run across a copy, I highly recommend that you grab it.

(One word of warning: if you read Michael’s review of the novel on his excellent Orrie Hitt website, be aware that it contains numerous spoilers.)
Posted by James Reasoner at 7:56 AM

Sounds like something to reccomend to Hard Case Files.

I've just started reading Black Dog Books Robert Torrey collection. Pretty much in this same genre. The first story is reprinted from Romantic Detective from the 40s but ts about a woman being blackmailed for sleeping with a man who isn't divorsed. And it's pretty clear that the detective is sleeping with his secretary, a friend of his client and numerous other women in the past. It makes the stories in SPICY Detective seem tame.

Oh, and Torrey's a pretty good writer.
But getting back on topic, thgis sounds like a good candidate for reprinting.

I picked up the other Fred Martin, VIOLENT DESIRES (Magnet Books), but it isn't Hitt -- in fact it's a badly written gangster novel.

I suspect Midwood may not have told Hitt they were changing the author name on this -- why would they? They buy the mss. outright as work for hire, basically, with no obligation; but in 1959 there were three other Hitts and HIRED LOVER, so they most likely didn't want a Hitt over-saturation, given that he probably had 10 Beacons out that year too.

Beb -- I have suggested to Charlie Ardai that Hard Case do a Hitt, and surprisingly he'd never read Hitt but is looking into it.

I think I will pitch a Hitt omnibus to Stark House, too.

I decided to take a quick look-see before I go to the appointment I mentioned in my email. So you would say you're pretty certain Hired Lover is penned by Orrie? I haven't received my copy yet, but am really curious now.

I think a Stark House three-fer of Hitt novels would be great, and would sell well, too.

Yeah, I agree with Michael that it's Hitt's work. When I first started reading it I wasn't sure, because the style seemed a little more terse than Orrie's usual prose. But as I went along I became more and more convinced. The style is certainly close enough that any differences can be attributed to the normal variations within a writer's work, and the way the plot is set up is unmistakably Orrie.

Or else somebody doing a really, really good Orrie Hitt impression, which I think is pretty unlikely. I suspect Michael nailed it in saying that Midwood just didn't want to flood the market with Hitt titles, any more than it was already flooded.

James, am I blaspheming my own "idol" when I say that your review makes the book sound almost too good to be an Orrie? Anyway, I still eagerly await my copy of "Hired Lover" (damn that Media Mail shipping).

Sounds too good to resist, James. I've just ordered a copy -- thanks for the heads-up on this one. I've been wanting to try a Hitt based on your on-going recs, but haven't found one that seemed quite right...'til now.

Today I found out why my copy of "Hired Lover" was taking so long to reach me. The seller emailed me saying the book had already been sold and he was refunding my money. He only waited about three weeks to email me! The copy I had originally ordered was $5, and now the next lowest priced copy is $15. Not bad at all, but I've got to squeeze all the money out of my part-time writing job that I can, so I'll have to wait a few more weeks. Of course, by that time, there probably won't be a copy left. I can just imagine a booksellers convention, where the sellers are all standing around scratching their heads, wondering why there's such a demand for "Fred Martin" books.

Ah, well, it is what it is. I'm sure there's more copies of "Hired Lover" that'll surface during the next few months. In any case, thanks for the reviews, Michael and James.

Sorry, B. Ritt -- the copy I reference above that I just picked up is that $15 copy you mention (from Holroyd). Looks like the next domestic copy is $25.

Anon,
You dirty rat! Just kidding. No problem; a generous friend offered to loan me his copy. Thanks very much for the heads-up, though.