April Kane and the Dragon Lady 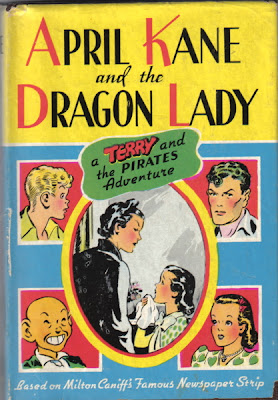 For the past month or so, between other books I’ve been reading MILTON CANIFF: CONVERSATIONS, a collection of interviews with and articles about the iconic comic strip artist who created TERRY AND THE PIRATES and STEVE CANYON. (More on that book when I finish reading it.) I’ve been a Caniff fan since I stumbled across a volume reprinting some of the TERRY AND THE PIRATES strip, back when I was in college.

So I was prompted to take down this book from my shelves and read it, too. It’s a Whitman juvenile novel published in 1942, based on one of the story arcs from the comic strip originally published in 1939. No credit is given to whoever turned the story into a novel, but it almost certainly wasn’t Caniff himself. There are numerous illustrations “adapted” from the strip, so while they’re based on Caniff’s work, they’ve apparently been redrawn and simplified somewhat, lacking a lot of Caniff’s trademark details.

So how does APRIL KANE AND THE DRAGON LADY read as a book? Well, my opinion of it is rather mixed. The characters are great. The teenage trio of clean-cut, all-American Terry Lee, April Kane (a Southern belle in China), and the valiant British youngster Deeth Crispin III make appealing heroes for the kids, Terry’s mentor Pat Ryan is a typical two-fisted, wise-cracking Yank, and the Dragon Lady herself is one of the most complex characters in comics, part heroine, part villainess, and always unpredictable. As you might expect from material originally published so long ago, the treatment by Caniff and the unknown novelist of Chinese and Japanese characters isn’t what you’d call politically correct, but in the end it’s Pat and Terry’s Chinese friends, Connie and Big Stoop, who do a lot of the heavy lifting to save the day.

The storyline itself finds Terry, April, and Deeth caught in the middle of the guerrilla warfare being conducted by the Dragon Lady and her followers against “the Invader”, Caniff’s euphemism for the Japanese. There’s plenty of intrigue in Hong Kong, spies, ambushes, breakneck chases, a hidden city in the Chinese mountains, rival warlords, literal cliffhangers . . . great stuff, in other words. I would have absolutely loved this book when I was twelve years old – which was, of course, the target audience for the Whitman juveniles. Reading it now, I can see that the unnamed author didn’t do a particularly good job in places, especially in the action scenes. Big battles get glossed over in a paragraph or two or occur off-screen. Hand-to-hand fights are awkwardly written and lacking in drama for the most part. But towards the end of the book things begin to come together better and the story really catches fire. The slam-bang climax had me feeling like I was twelve again for a few minutes, and that’s not a bad thing. Unfortunately, the ending is rather abrupt and leaves some elements unresolved.

Overall, if you’re a Caniff fan, APRIL KANE AND THE DRAGON LADY is well worth reading, although the comic strips themselves are much better. I believe the novel was reprinted a few years ago, but copies of the original can be found fairly cheaply on the Internet. By the way, that dust jacket picture is one that I found on-line. My copy doesn’t have a dust jacket.

And as another aside, when I was a kid the lead feature in the comics section of the local paper every Sunday was TERRY AND THE PIRATES, but it was written and drawn at that time by George Wunder, who replaced Caniff on the strip when Caniff left TERRY to create STEVE CANYON. I didn’t care for Wunder’s art and never read the strip back in those days, but since then I’ve read reprints of some of his work, and it’s not bad. I just had to be older to appreciate it. My adventure strips of choice when I was a kid were SMILIN’ JACK and BUZ SAWYER. Wonder how they’d hold up if I read them now.

Email ThisBlogThis!Share to TwitterShare to FacebookShare to Pinterest
Labels: Caniff, comic strips, Terry and the Pirates

You sure know how to make us old duffers sentimental. I used to just sit and stare at the Caniff dailies in my newspaper. He created an atmosphere on the page that was, for me, never equaled by any other artist. Great post. Thanks. Ed Gorman

Ah, it's not just the comics that make me nostalgic. It's those Whitman books. One of my favorites was Joyce of the Secret Squadron based on the Captain Midnight radio show. And I had one with Blondie and Dagwood, too.

I have a copy of JOYCE OF THE SECRET SQUADRON. Maybe I should go ahead and read it. Whitman was probably my favorite publisher when I was a kid, reading all the novels they did based on Sixties TV shows.

You owe it to yourself to take a look back at Buz Sawyer - there are plenty of elements that are of their time, sure, but the strip certainly holds up today. Manuscript Press recently put out a couple of reprint volumes covering the first few years of dailies.

I liked this book, but I think that has some inconsistencies. For example. it doesn't keep or the author didn't know how to keep some elements of the strip in this book. Buy Viagra Viagra

Ha, I just picked up a mint copy of this book (no dust jacket, alas) for a buck. My experience tallies with your description. It seemed to be setting up a sequel. I wonder if one was ever published?

i have a hardback book, in condition. does anyone know if it is worth anything. copyright dated 1942

Katie,
A quick check of ABE shows quite a few copies of that edition listed from $4.00 to $10.00, depending on condition. So it's not worth a whole lot, but it is a pretty good book, especially if you're a fan of the comic strip.

I'm glad to come across your review because I just read APRIL KANE AND THE DRAGON LADY. Your information is helpful. I did notice that, unlike my other Whitman Authorized Editions read/reread last week, it didn't claim to be an original story.

The back has a big, pink cloud listing 14 of their books featuring movie stars or comic strip characters. To the left of the top of the cloud is a castle, partially obscured by all that pink. The twin-engined plane has only a bit of cloud hiding the bottom.

Underneath the last title, which is the one for Smilin' Jack, there's a large open book that lies on its back. A girl in dutch costume kneels on the left half of the book. She's holding up a page with her left arm while she faces the reader. A Native American sits on the right half. An open page rests on his bowed back. We see him in profile.

A bare-chested man in pants, sash, and turbin is in the middle, from about the hips up. He's offering readers a tray with a small, open chest of jewels. More jewels are on the tray.

Still, I was glad to borrow the cover picture you're using because a previous owner drew a big "Z" in blue ink to the right of the Dragon Lady's head.